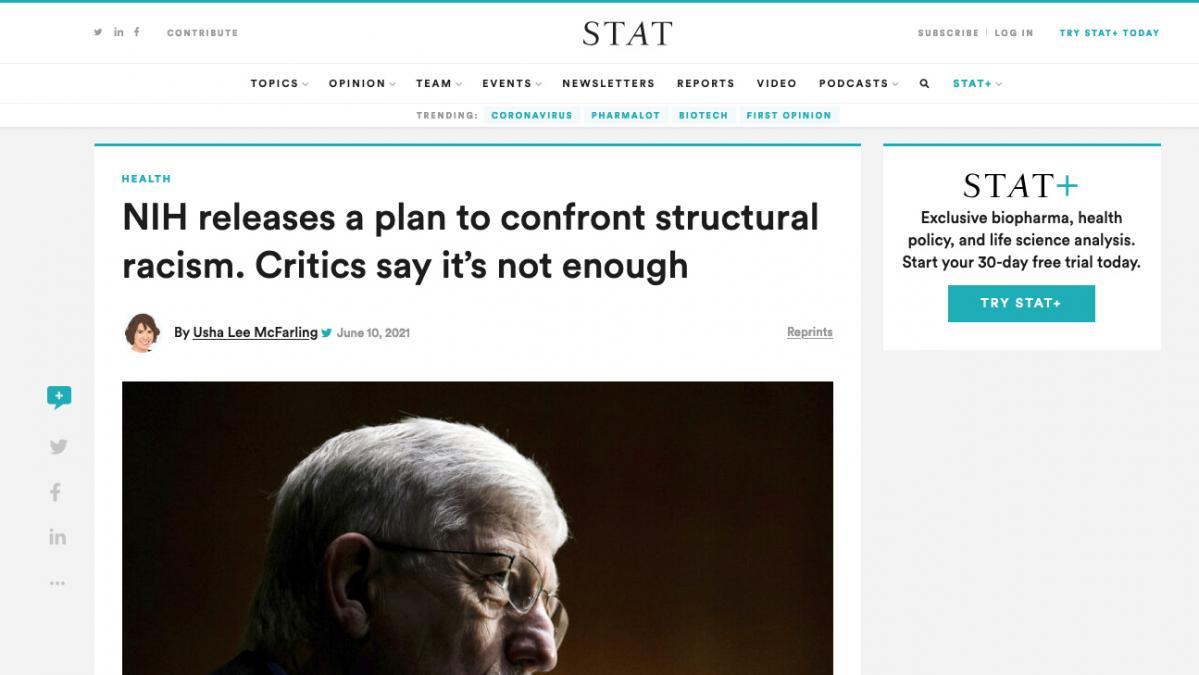 A screenshot of a story about the NIH's plan to address structural racism from STAT News. Coulter Department Associate Professor Manu Platt is among the advocates who shared their thoughts on the plan for the story.

Praising the federal agency for acknowledging the problem and taking steps to address it, Manu Platt suggested there’s still more work to do after the National Institutes of Health released a plan June 10 to close gaps in the funding awarded to white and minority biomedical researchers.

Platt told health news site STAT, “I love that they are doing things. I like they are saying the word racism.” But he cautioned that the agency may not be moving fast enough to fix structural problems that result in Black scientists receiving far fewer grants, which are critical to supporting faculty members and earning them tenure.

“It’s very difficult out there,” he told STAT’s Usha Lee McFarling. “Funding Black investigators needs to be the linchpin.”

Platt, associate professor in the Wallace H. Coulter Department of Biomedical Engineering, was one of several advocates who told STAT the plan released in the journal Cell was an important step, but perhaps not enough.

“As scientists, administrators, staff, and leaders at the U.S. National Institutes of Health (NIH), we take this opportunity to acknowledge that structural racism has been a chronic problem in our society, and biomedical science is far from free of its stain,” a group of agency leaders, including director Francis Collins, wrote. “Structural racism has significantly disadvantaged the lives of many people of color across our society, including those who conduct or support the science funded by NIH.”

The leaders pledged to “enhance diversity, equity, and inclusion and using every tool at our disposal to remediate the chronic problem of structural racism.”

Platt, who was recently asked to advise the National Institute of Biomedical Imaging and Bioengineering on diversity issues, said his experience serving on funding review panels showed him that systemic racism plays a clear role, even though race is not listed on grant applications. “They look at where people trained, who they trained with, and what institution they’re at. If you’re at an HBCU (historically Black college and university) or a smaller institution, you get penalized,” he said. “And structural racism may be playing a role in why people are not being hired at those larger institutions to begin with. It all feeds forward.”

The NIH could easily prioritize funding for scientists from underrepresented groups, Platt said, as it does for early-career scientists to help them establish a funding track record and improve their chances of success and tenure. He said such a program would be a more direct route to increasing racial parity in funding than running programs to help improve the skills of minority scientists, such as grant-writing workshops.