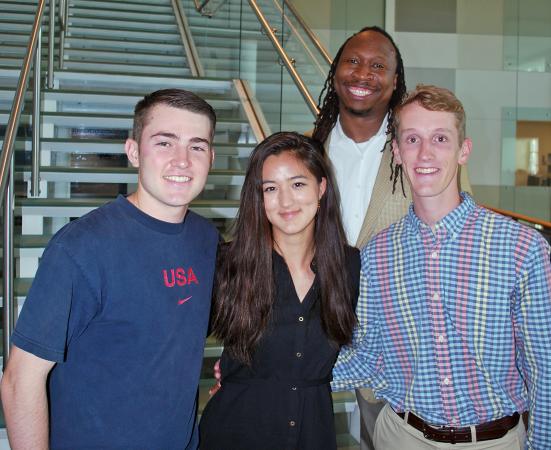 Front, from left: Dan Whitfield, Elizabeth Martin, and Jacob Klamm from the U.S. Military Academy spent four weeks working in the lab of Manu Plat (in back). 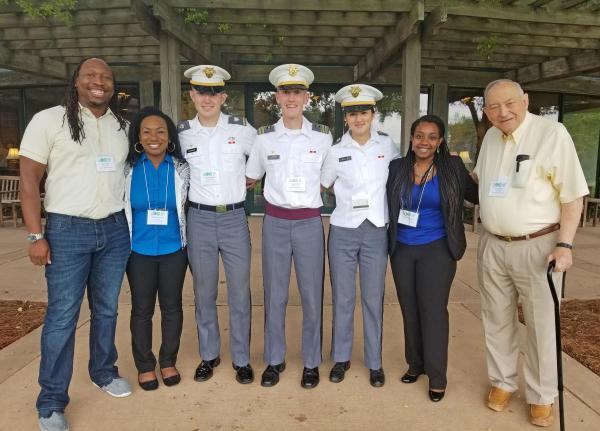 A few weeks at the Georgia Institute of Technology may have clarified Elizabeth Martin’s long-range plans, but she’ll have to fulfill her military commitment first.

“Actually, my four weeks here have had a huge impact,” says Martin, one of three cadets from the United States Military Academy (USMA) at West Point to take part in a summer REU (research experience for undergrads) program in the lab of Manu Platt, a researcher with the Petit Institute for Bioengineering and Bioscience at Georgia Tech.

“Before, I wasn’t really considering medical school,” says Martin, a rising sophomore from Connecticut majoring in chemistry, who envisions a career in clinical research. “This experience in Dr. Platt’s lab has convinced me: I do want to pursue being a neurologist, and I love the research aspect.”

All three of the West Point cadets – Martin, Jacob Klamm, Dan Whitfield – in Platt’s lab plan on going to medical school eventually. They’ll have their work cut out for them, because the USMA’s medical school program is very competitive – only 10 to 20 members of each class may proceed directly to medical school following graduation. But Platt isn’t going to bet against them.

“These are disciplined, motivated students, and I’m thinking how great it would be to have them here for grad school when the time comes,” says Platt, director of diversity for the National Science Foundation (NSF) Center on Emergent Behavior of Integrated Cellular Systems (EBICS) at Georgia Tech, which facilitated the students’ summer REU experience (as part of Tech’s larger initiative, SURE, for Summer Undergraduate Research in Engineering/Sciences).

EBICS aims to create a scientific discipline for building living multi-cellular machines to address problems in health, security, and the environment. To get there, the program relies on integrated research and education efforts, human resource development, diversity and outreach programs, and knowledge transfer activities.

The USMA cadets, who completed their stint at Georgia Tech last week, were sold on the research experience during a visit by Platt to the military academy earlier this year.

“A friend of mine – we were postdocs together – is a professor at West Point, and he invited me to give a talk there,” says Platt, associate professor in the Wallace H. Coulter Department of Biomedical Engineering. “These students have a limited time frame, only a month. But they are amazing students. Going forward, I’d like to grow that pipeline.”

Whitfield, a rising junior majoring in life sciences, had previous research experience at West Point, but wanted a summer program to develop skills and methods for his own research.

“At West Point, we’re doing work on Acinetobacter baumannii, a multi-drug resistant bacteria causing a lot of trouble for soldiers who served in Iraq and Afghanistan,” says Whitfield, who is from Eagle, Idaho.

Klamm, from Enid, Oklahoma, is a rising senior life sciences major who says he’d always been more clinically oriented, but gained a greater appreciation for research while working in Platt’s lab, where the mission is to fuse engineering, cell biology, and physiology to understand how cells sense, respond, and remodel their mechanical and biochemical environments for repair and regeneration in health and disease – and then to translate the results to address global health disparities.

“This was my first real research experience,” Klamm says. “I wasn’t sure what to expect, or how I’d feel about spending eight or nine hours a day in a lab. But it was really cool. I enjoyed it, and I’m definitely more open now to the idea of doing research.”