Synthetic Organelle Shows How Tiny Puddle-Organs in our Cells Work

Synthetic Organelle Shows How Tiny Puddle-Organs in our Cells Work
Just tiny puddles. That's what some of our cells' organelles are, and this synthetic organelle, engineered in the lab, shows how they can work.
September 27, 2018 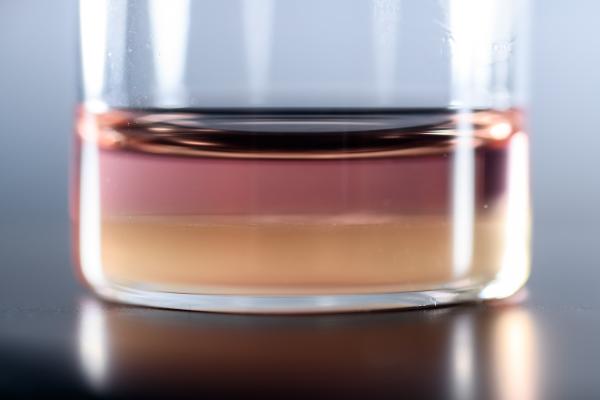 In a vile three watery solutions phase separate into three layers. In membraneless organelles, chemical reactions occur at the interfaces of such layers, processing a reactant step-by-step and moving the reaction product from one layer to the next. Credit: Georgia Tech / Rob Felt 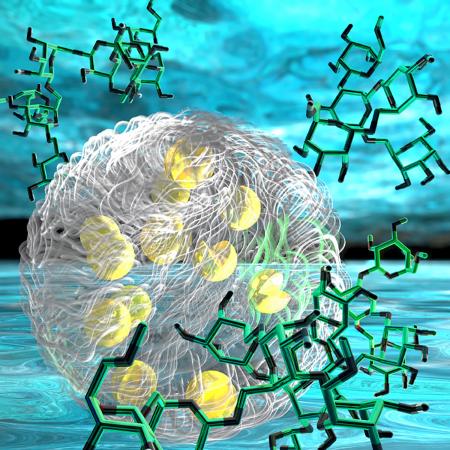 An illustration of part of a synthetic organelle without a membrane. Here we see two layers that phase separate like oil and water, but both layers are water. There is no oil. Each layer contains a different solute that gives it its own chemical thermodynamics, keeping it separate from the other one. Chemical reactions cascade from one layer to the next in a chain reaction. The molecules illustrated on the outside are sugars called dextran, a solute. The gray middle layer contains an enzyme, depicted as s 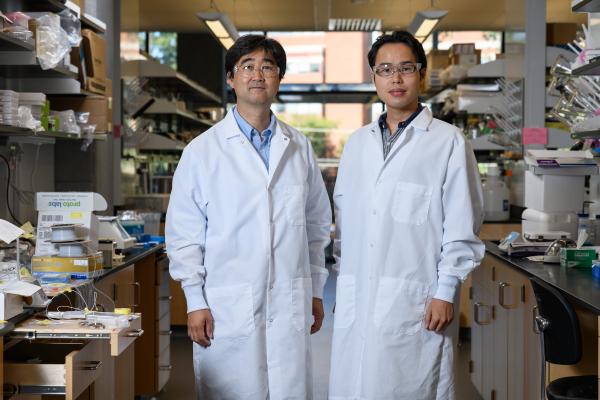 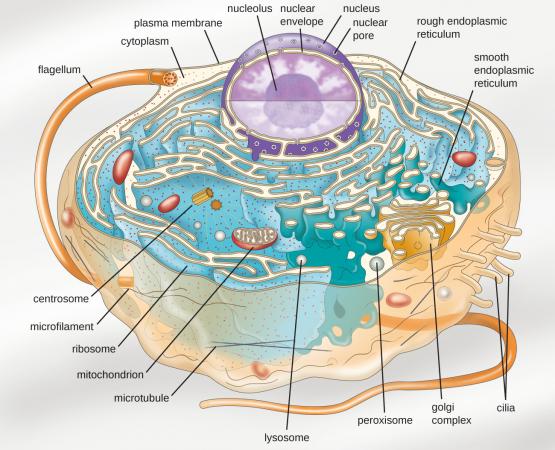 Inside the nucleus, seen here as a purple sphere, is a smaller purple sphere, the nucleolus, which is the most prominent membraneless organelle in our cells. Credit: CNX OpenStax /  Download for free at http://cnx.org/contents/e42bd376-624b-4c0f-972f-e0c57998e765@4.4  / commons license

The nucleolus, at the center of the cell's nucleus, is the most prominent organelle without a membrane. It was once thought that it disappeared during cell division then reappeared. Since it exists in solution, in reality, it gets shaken up into pieces that come back together as one piece again. Credit: CNX OpenStax /  Download for free at http://cnx.org/contents/e42bd376-624b-4c0f-972f-e0c57998e765@4.4  / commons license 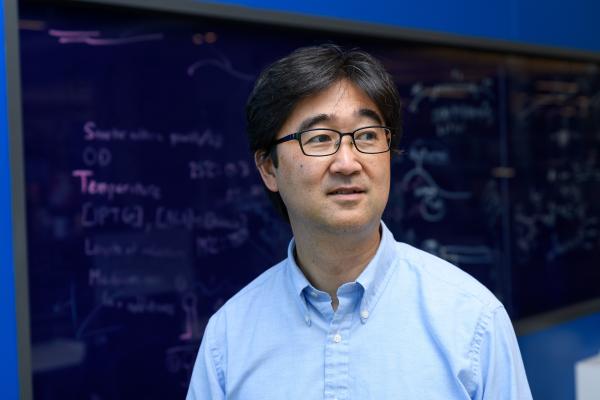 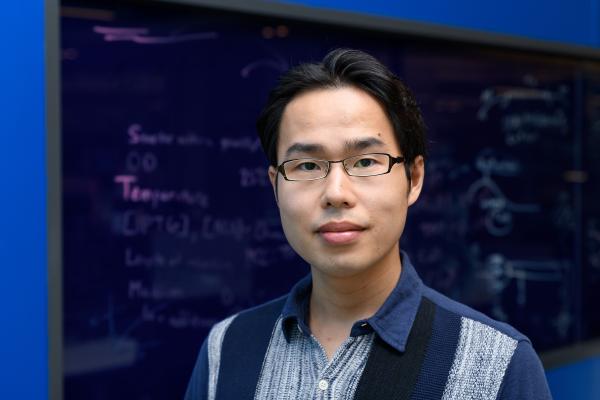 Tai Kojima is a postdoctoral researcher in the lab of Shu Takayama, in the Wallace E. Coulter Department of Biomedical Engineering at Georgia Tech and Emory University. Credit: Georgia Tech / Rob Felt

A couple of sugars, a dash of enzymes, a pinch of salt, a splash of a real common lab chemical, all arranged in watery baths. And researchers had made a synthetic organelle, which they used in a new study to explore some odd cellular biochemistry.

The researchers at the Georgia Institute of Technology made the chemical medley in the lab to closely mimic membraneless organelles, mini-organs in cells that are not contained in a membrane but exist as pools of watery solutions, or puddles. And their model demonstrated how, with just a few ingredients, the organelles could carry out fine-tuned biological processes.

A quick look at membraneless organelles should aid in understanding the research’s significance.

Organelles that are pools of watery solutions and not objects with membranes are a fairly recent discovery. A prime example is the nucleolus. It resides inside of the cell’s nucleus, which is an organelle that does have a membrane.

“After cell division, the nucleolus comes back together as a single compartment of fluid,” said Shuichi Takayama, the study’s principal investigator and a professor in the Wallace E. Coulter Department of Biomedical Engineering at Georgia Tech and Emory University.

Membraneless organelles can be made up of a few different aqueous solutions, each with different solutes like proteins or sugar or RNA or salt. Differences in the thermodynamics of the solutions, that is, how their molecules bounce around, keep them from merging into a single solution.

Instead, they phase separate the way oil and water do, even after intermingling. But there’s no oil in this case.

“They’re all waters,” Takayama said. “They just don’t mix with each other because they have different solutes.”

What lifelike processes did the synthetic experiment demonstrate?

During intermingling, important things happen. The nucleolus, for example, is vital to DNA transcription. But the synthetic set-up, a collection of watery solutions made by the study’s first author, Taisuke Kojima, carried out a simpler series of reactions that demonstrated how membraneless organelles could process sugar.

“We had three phases of solutions that each held different reactants,” Kojima said. “It was like a ball with three layers: an outer solution, an intermediate solution, and a core solution. Glucose was in the outer layer; an enzyme, glucose oxidase, was in the second layer, and horseradish peroxidase was in the core along with a colorimetric substrate that gave us a visible signal when the last reaction we were looking for occurred.”

“This type of cascading reaction is what one would expect to see membraneless organelles perform,” Takayama said.

The cascade even transported each reaction product from one compartment to the next, something very typical in biological processes, like organs digesting food or an organelle processing molecules.

What can a surprise discovery teach us?

Part of the reaction took the researchers by surprise, and it resulted in a novel discovery.

“When researchers think about membraneless organelles, we often think that the reactions inside them are more efficient when their enzymes and substrates are in the same compartment,” Takayama said. “But in our experiments, that actually slowed the reaction down. We said, ‘Whoa, what’s going on here?’”

“When the substrate is in the same place where the product of the reaction also builds up, the enzyme sometimes gets confused, and that can impede the reaction,” said Kojima, who is a postdoctoral researcher in Takayama’s lab. “I was pretty surprised to see it.”

Kojima put the enzymes and substrate into separate solutions, which interfaced but did not merge to a single solution, and the reaction in his synthetic organelle worked efficiently. This showed how unexpected subtleties may be fine-tuning organelle chemistry.

“It was a Goldilocks regime, not too much contact between substrate and enzyme, not too little, just right,” Takayama said.

“Sometimes, in a cell, a substrate is not abundant and may need to be concentrated in its own little compartment and then brought into contact with the enzyme,” Takayama said. “By contrast, some substrates can be very abundant in the nucleus, and it might be important to partition them off from enzymes to get just enough contact for the right kind of reaction.”

Also read: Buzzing Cancer Drugs into Malignancies in the Brain