Susan Margulies Elected to National Academy of Medicine
Coulter Department chair earns one of the highest honors in health and medicine
December 2, 2020 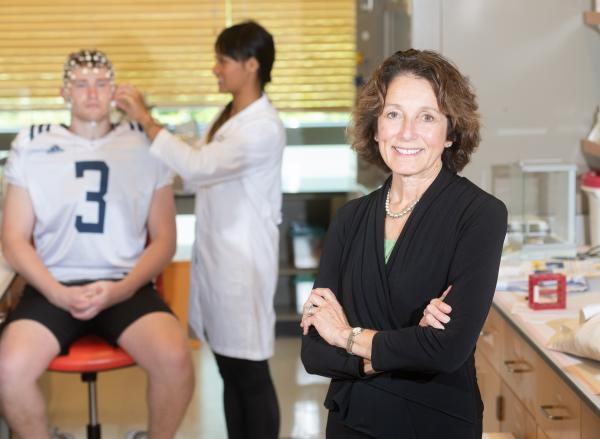 Susan Margulies, chair of the Walter H. Coulter Chair of the Coulter Department of Biomedical Engineering at Georgia Tech and Emory University, was elected to the National Academy of Medicine Class of 2020. Her research focuses on researching biomechanics of brain injury. Photo by Allison Carter

The National Academy of Medicine (NAM) has elected Georgia Tech Professor Susan Margulies to its prestigious 2020 class. Election to NAM is considered one of the highest honors in the fields of health and medicine and recognizes individuals who have demonstrated outstanding professional achievement and commitment to service.

Margulies was selected for her work "identifying how and why injuries occur in children’s brains and lungs through the development and use of novel platform technologies and models, and for translating basic discoveries of three therapies in pre-clinical trials," according to the Academy. She is only the second person from Georgia Tech to receive the honor. The late Bob Nerem, founding director of the Petit Institute for Bioengineering and Bioscience, is the other.

Margulies is the Wallace H. Coulter Professor and Chair in the Wallace H. Coulter Department of Biomedical Engineering (BME) at Georgia Institute of Technology and Emory University, a shared department between the two schools. She is also a Georgia Research Alliance Eminent Scholar in Injury Biomechanics. Her research interests center around traumatic brain injury in children and ventilator-induced lung injury with a focus in these areas on prevention, intervention and treatments.

“We are incredibly proud and offer our warmest congratulations to Susan Margulies as she is named to the 2020 class of the National Academy of Medicine,” said Steven W. McLaughlin, provost and executive vice president for Academic Affairs at Georgia Tech. “This well-deserved distinction is a testament to her as an exemplary scholar, leader, and collaborator.”

New NAM members are elected by current members through a process that recognizes individuals who have made major contributions to the advancement of the medical sciences, health care and public health.

Margulies came to Georgia Tech and Emory in 2017 from the University of Pennsylvania. She now leads a BME department that is consistently ranked as one of the nation's most prominent programs of its kind in both graduate and undergraduate education. In 2020, U.S. News & World Report ranked BME’s graduate program (based at Georgia Tech) No. 2 in the U.S., and  the joint Georgia Tech/Emory BME graduate program was also ranked No. 2. It is the largest BME department in the country, with 68 faculty on two campuses and more than 1,500 undergraduate and graduate students.

Margulies, also a member of the Petit Institute, earned her BSE in Mechanical and Aerospace Engineering at Princeton University and a PhD in Bioengineering from the University of Pennsylvania. She completed a postdoctoral fellowship at Mayo Medical School. Earlier this year, in February, Margulies was also elected to the National Academy of Engineering (NAE), which is among the highest professional distinctions conferred to an engineer.