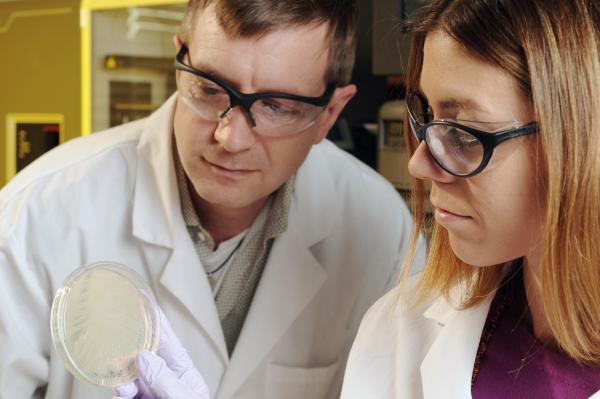 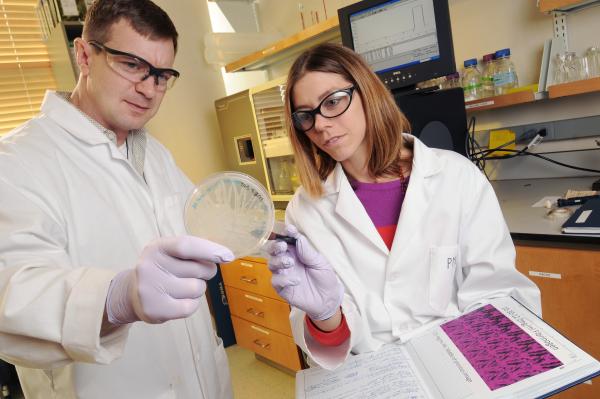 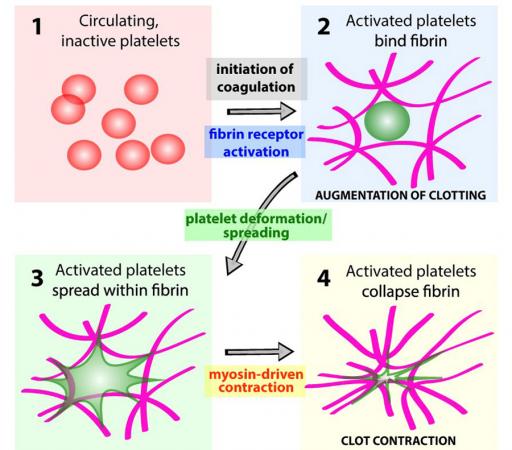 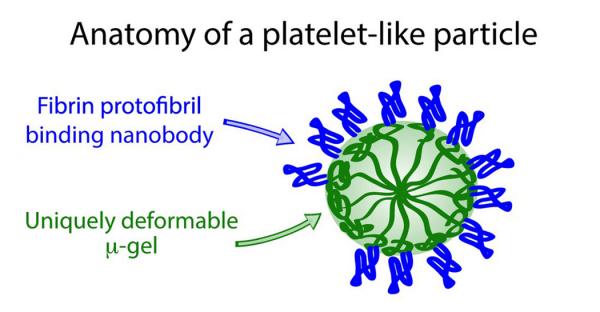 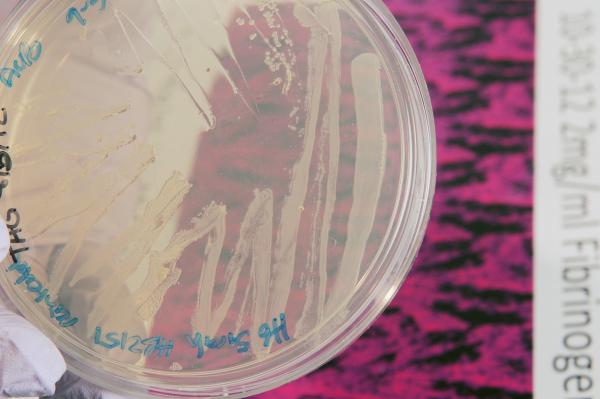 A new class of synthetic platelet-like particles could augment natural blood clotting for the emergency treatment of traumatic injuries – and potentially offer doctors a new option for curbing surgical bleeding and addressing certain blood clotting disorders without the need for transfusions of natural platelets.

The clotting particles, which are based on soft and deformable hydrogel materials, are triggered by the same factor that initiates the body’s own clotting processes. Testing done in animal models and in a simulated circulatory system suggest that the particles are effective at slowing bleeding and can safely circulate in the bloodstream. The particles have been tested with human blood, but have not undergone clinical trials in humans.

Supported by the National Institutes of Health, the U.S. Department of Defense, and the American Heart Association, the research was reported September 7, 2014, in the journal Nature Materials. Researchers from the Georgia Institute of Technology, Emory University, Children’s Healthcare of Atlanta and Arizona State University collaborated on the research.

“When used by emergency medical technicians in the civilian world or by medics in the military, we expect this technology could reduce the number of deaths from excessive bleeding,” said Ashley Brown, a research scientist in the Georgia Tech School of Chemistry and Biochemistry and first author of the paper. “If EMTs and medics had particles like these that could be injected and then go specifically to the site of a serious injury, they could help decrease the number of deaths associated with serious injuries.”

The bloodstream contains proteins known as fibrinogen that are the precursors for fibrin, the polymer that provides the basic structure for natural blood clots. When they receive the right signals from a protein known as thrombin, these precursors polymerize at the site of the bleeding. The synthetic platelet-like particles use the same trigger, and so are activated only when the body’s natural clotting process is initiated.

To create that trigger, the researchers followed a process known as molecular evolution to develop an antibody that could be attached to the hydrogel particles to change their form when they encounter thrombin-activated fibrin. The resulting antibody has a high affinity for the polymerized form of fibrin and a low affinity for the precursor material.

“Fibrin production is on the back end of the clotting process, so we feel that it is a safer place to try to interact with it,” said Tom Barker, an associate professor in the Wallace H. Coulter Department of Biomedical Engineering at Georgia Tech and Emory University, and one of the paper’s co-corresponding authors. “The specificity of this material provides a very important advantage in triggering clotting at just the right time.”

The effectiveness of the platelet-like particles has been tested in an animal model and in a microfluidic chamber designed to simulate conditions within the body’s circulatory system. In the chamber, tubes about the thickness of a human hair were lined with endothelial cells as in natural blood vessels.

The chamber was used to study normal human blood, as well as human blood that had been depleted of its natural platelets. In platelet-rich blood, clots formed as expected, and blood without platelets did not form clots. When the platelet-like particles were added to the platelet-depleted blood, it was able to clot.

The researchers also tested blood from infants that had undergone open heart surgery, which requires that their blood be diluted, reducing its clotting ability. When platelet-like particles were added to the dilute neonate blood, it was able to form clots.

Finally, safety testing was done on blood from hemophiliac patients. Because that blood lacks the triggers needed to cause fibrin formation, the particles had no effect.

Before they can be used in humans, the particles will have to undergo human trials and receive clearance from the U.S. Food & Drug Administration (FDA).

About one micron in diameter, the particles were originally developed to be used on the battlefield by wounded soldiers, who might self-administer them using a device about the size of a smartphone. But the researchers believe the particles could also reduce the need for platelet transfusions in patients undergoing chemotherapy or bypass surgery, and in those with certain blood disorders.

“For a patient with insufficient platelets due to bleeding or an inherited disorder, physicians often have to resort to platelet transfusions, which can be difficult to obtain,” said Dr. Wilbur Lam, another of the paper’s co-authors and a physician in the Aflac Cancer and Blood Disorders Center at Children’s Healthcare of Atlanta and the Department of Pediatrics at the Emory University School of Medicine. “These particles could potentially be a way to obviate the need for a transfusion. Though they don’t have all the assets of natural platelets, a number of intriguing experiments have shown that the particles help augment the clotting process.”

In addition to providing new treatment options, the particles could also cut costs by reducing costly natural transfusions, said Lam, who is also an assistant professor in the Coulter Department of Biomedical Engineering at Georgia Tech and Emory University.

What ultimately happens to the hydrogel particles circulating in the bloodstream will be the topic of future research, noted Brown. Particles of similar size and composition are normally eliminated from the body.

In addition to those already mentioned, co-authors of the paper included Andrew Lyon, co-corresponding author and dean of the College of Science and Technology at Chapman University; Sarah Stabenfeldt, co-first author and now an assistant professor at Arizona State University; Byungwook Ahn, Riley Hannan and Victoria Stefanelli, from the Coulter Department of Biomedical Engineering; Kabir Dhada and Emily Herman from the Georgia Tech School of Chemistry and Biochemistry; Dr. Nina Guzzetta from the Division of Pediatric Cardiology at Children’s Healthcare of Atlanta and Emory University School of Medicine; and Alexander Alexeev from the Woodruff School of Mechanical Engineering at Georgia Tech.

This research was supported by the National Institutes of Health under awards HHSN268201000043C, R21EB013743 and R01EB011566; the John and Mary Brock Discovery Research Fund; the Department of Defense under award W81XWH1110306, and an American Heart Association Postdoctoral Fellowship. The opinions expressed in this news release are those of the authors and do not necessarily reflect the official position of the sponsoring agencies.