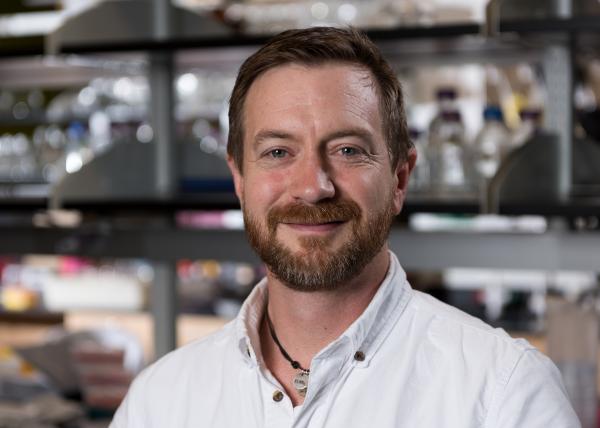 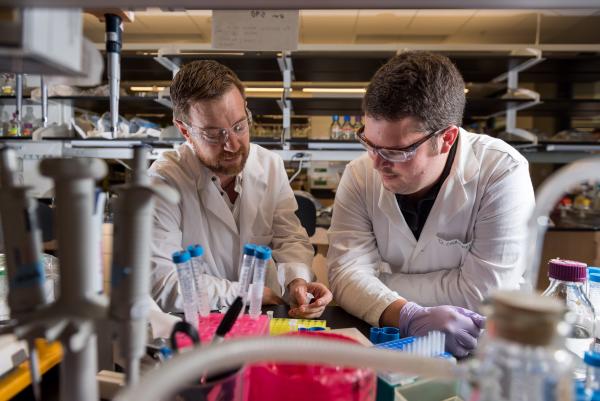 The National Institutes of Health (NIH) has announced a $3.5 million Transformative Research Award to Thomas Barker, an associate professor in the Wallace H. Coulter Department of Biomedical Engineering at Georgia Tech and Emory University. The five-year grant will support research into new approaches for tracking and treating pulmonary fibrosis, a disease that claims 40,000 lives per year.

Pulmonary fibrosis is an incurable disease in which the uncontrolled growth of scar tissue severely damages the ability of the lungs to bring oxygen into the body. Researchers plan to hijack the cellular mechanisms that normally worsen the disease, causing them to instead produce a chemical compound that would reduce the cross-linking associated with the fibrosis.

The award is one of 13 Transformative Research Awards announced by the NIH on October 6. Each year, the exclusive NIH initiative funds a small number of “high-risk, high-reward” research proposals designed to advance innovative approaches to major contemporary challenges in biomedical research.

“Fibrosis is wound healing that just won’t quit,” explained Barker. “Cells continually repair the same tissue over and over again until you get this dense, biophysically restricted scar tissue. That scar tissue not only impairs the ability to bring in oxygen, but at the cellular level that increased stiffness also provides a dominant signal that continues to drive this aberrant process.“

Barker, whose lab studies how cells respond biochemically and biophysically to the microenvironment around them, wants to tap into the signaling that occurs between the cells and their environment to co-opt the cellular response to stiffness of the extracellular matrix. Instead of creating more scar, the cells would instead respond by releasing a protease to dissolve some of the crosslinks that create the stiffness.

“In the disease process, as more extracellular matrix is deposited and more cross links are created, the stiffness of the tissue increases,” Barker explained. “If we can have that stiffness inherently drive the production of proteases, which are enzymes that break down the extracellular matrix, then there’s the potential to create a feedback loop in which these enzymes would come in and cleave the unwanted matrix proteins. That would relieve some of the crosslinks and begin to soften the tissue.”

The researchers plan to use conventional gene therapy techniques to insert a mechanism into the cells that would activate only when the fibrotic process was occurring. When not needed, the mechanism would lie dormant, allowing it to be distributed broadly among both normal and abnormal lung cells. “It would be a self-limiting therapy that’s controlled locally at the cellular level,” Barker said.

While treatment is the ultimate goal, Barker also wants to develop a signaling mechanism that could be used to track progress of the disease. A small number of sentinel cells affected by the stiffening extracellular matrix would express a fluorescent protein, allowing clinicians to see where conditions are changing. Currently, there is no way to measure changing stiffness in the lungs of living organisms.

Barker doesn’t expect to attain all of the project goals within the grant period, but he does hope to build a foundation for research, which could have applications to other diseases such as cancer that also have biomechanical signaling components.

“The idea that we can target the biomechanics of a tissue as a tractable target for gene therapy has not been explored,” Barker said. “It is ripe for exploration at this time because the last decade or so has seen a flurry of research into how biomechanics drives disease and different cellular processes. Scientists have made some significant strides in understanding the mechanisms of how cells sense mechanics, how those things go awry, and how the environment can drive some significant biology.”

The proposal was developed in collaboration with MD/PhD student Dwight Chambers. Barker also plans to work with Associate Professors Melissa Kemp and Phil Santangelo from the Department of Biomedical Engineering, and with a research team at the University of Michigan.

Under the High-Risk, High-Reward Research program supported by the NIH Common Fund, awards support exceptional investigators pursuing bold research projects that span the broad mission of the NIH, including developing methods for cells to synthesize their own drugs, using cell phones to identify and track disease-carrying mosquitoes in their natural habitats, stopping depression by monitoring and altering brain cell states, and exploring how socially learned behavior can be passed on biologically to future generations.

The NIH Common Fund encourages collaboration and supports a series of exceptionally high-impact, trans-NIH programs. Common Fund programs are designed to pursue major opportunities and gaps in biomedical research that no single NIH Institute could tackle alone, but that the agency as a whole can address to make the biggest impact possible on the progress of medical research. Barker’s award will also be supported through the National Heart, Lung and Blood Institute (NHLBI).

The Transformative Research Award, established in 2009, promotes cross-cutting, interdisciplinary approaches and is open to individuals and teams of investigators who propose research that could potentially create or challenge existing paradigms.