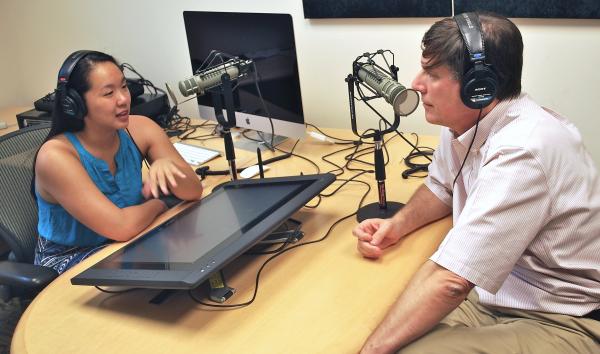 It’s Tuesday afternoon and the fourth floor of the U.A. Whitaker Biomedical Building is filled with the silent hum of young brains working alone and in small groups, biomedical engineering students surrounded by their ideas, which are literally written on the walls around them, and Joe Le Doux is smiling.

“I guess the Learning Commons idea is taking off,” says Le Doux, associate professor in the Wallace H. Coulter Department of Biomedical Engineering (BME), where he is executive director for learning and student experience, a new position that places him in the role of chief facilitator for the recently opened, student-directed BME Learning Commons. “This is exactly what we want to see. It’s a start.”

A work in progress, the BME Learning Commons isn’t just a physical space – the ongoing renovation of what was a fourth-floor faculty/staff lounge into a social learning environment for BME students (an ongoing process. “It’s actually more of a movement,” Le Doux says. “And the goal is for students to take ownership of their BME experience.”

Le Doux defines his role as, “a representative of the department there to empower the students. That’s the objective. It’s very important that this is student owned and student led.”

“Some of the BMEs I talked to were really skeptical and actually a little condescending about what the department is trying to do with this program. Others were hesitant,” says Cheung. “And then some were excited. I would say that the general attitude towards the Learning Commons has taken a 180. I think part of it is because now we have a running program.

She’s talking about the mentorship program, a popular response to what was identified as one of the highest priorities in those early days of planning last winter and spring.

All told, there are about 540 participants throughout the BME Learning Commons Mentorship Program now, and Le Doux expects that figure to reach 650, once the upperclassmen are matched with their alumni mentors

“The mentorship program was the first thing to grow out of the Learning Commons, but the space itself is evolving,” says Le Doux, looking at some of the comments and ideas, which are written in marker ink on walls that are actually huge white boards.

There are several different requests for coffee makers and refrigerators, one for hammocks outside on the patio, one for Legos, one for a telescope and one that says, “Two words … wet bar.” Le Doux and Cheung chuckle at one particularly vivid suggestion for heating control, accompanied by two cartoons. One depicts a wilting man on all fours saying, “Its too hot.” The other depicts a shivering man saying, “Its too cold.”

“We’re encouraging students to think of this as an experimental space right now,” says Le Doux. “We haven’t plunked down a lot of money on renovating the space yet, so student feedback and comments will generate what ultimately happens to the space.”

According to Le Doux, this sense of student empowerment is key to the success so far, and the promise, of the BME Learning Commons. “Out of all this, a new student organization has emerged to harness all of this energy,” he says, referring to the ‘product owners’ who have taken on leadership roles in ‘scrum teams,’ part of the ‘agile management’ methodology (prevalent in the software industry, adapted by the Learning Commons folks), a management style that fits well with rapidly changing needs.

“So, we have about a dozen product owners so far who are in the process of forming teams, and we have literally just started having weekly Learning Commons leadership team meetings,” Le Doux says.

Cheung is the product owner for what may be the Learning Commons’ next up-and-running program, the podcast studio. “I’m thinking that the first podcast will be an introduction to the Learning Commons as a whole,” she says, adding, “Now that people are seeing that we are very serious about creating a change in BME, they’re more willing to use the services that we offer and will be offering.”

With 1,400 students in BME, that leaves plenty of opportunities for a wide variety of podcasts, which means lots of stories and human experiences, which Le Doux believes will only enhance the learning experience in the Coulter Department. “Storytelling is a fundamental human trait,” he says. “We all create narratives to explain how things work. Sharing stories is a natural, effective way to learn. Research shows that when experts solve problems, the first thing they do is talk to somebody else who solved a problem similar to theirs. It’s essentially story collection, and we see that as one way to provide more interaction with alumni or faculty or experts in the field.”

There is a definitive StoryCorps vibe to the podcast idea, and that isn’t an accident. StoryCorps is a nonprofit organization that is producing one of the largest oral history projects ever conceived. Since 2003, the organization has collected and archived more than 50,000 interviews, including weekly broadcasts on National Public Radio.

“StoryCorps certainly has influenced our thinking,” says Le Doux, who employed a similar program in a course he taught, BMED 1000, as a way of connecting students with alumni, with experts in biomedical engineering, and essentially, with their potential futures.

“It was a way of building community, because our students don’t necessarily know what everybody with a BME degree is up to.” Le Doux says. “In fact, there is some angst and uncertainty about what to do with a BME degree. So our students worked in teams, went out and interviewed biomedical engineers, and asked them deep, open-ended questions.”

They gathered more than 80 stories, which Le Doux, with the help of Alexa Siu and her BME Stories scrum team, plans to post online soon. Cheung is looking forward to assembling a team of students to gather even more stories, with the help of the podcast studio. The idea is to build a catalog of stories from experts, alumni, faculty, and students. “I imagine it as something students can open up and find what they need in the experiences of others, find something that resonates with them, something they can learn from,” Le Doux says. “Kind of like a box of wisdom.”