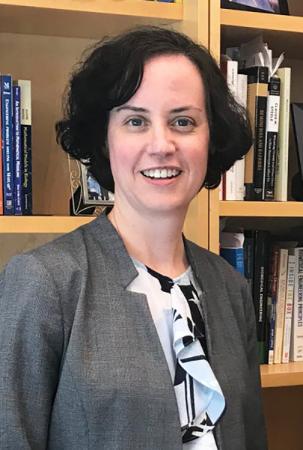 The Biomedical Engineering Society (BMES) awards Fellow status to members who had demonstrated exceptional achievement while maintaining a consistent record of participation within the society. It’s a designation generally given to some of the most accomplished leaders in the field of biomedical engineering.

Johnna Temenoff, professor in the Wallace H. Coulter Department of Biomedical Engineering at Georgia Tech and Emory University and a researcher in the Petit Institute for Bioengineering and Bioscience, is among this year’s 27 BMES Fellows, nominated by their peers, who will be recognized this year at the BMES 2020 Virtual Meeting (Oct. 14-17).

“It is a great honor to be elected as a BMES Fellow this year,” said Temenoff, associate chair for translational research in the Coulter Department, where she holds the Carol Ann and David D. Flanagan Professorship II. “All of my training has been in biomedical engineering and the first national conference I went to as an undergraduate was BMES. So the society has a special place in my heart.”

Temenoff, principal investigator of a lab that designs synthetic and naturally-derived biomaterials for orthopedic applications, also is deputy director of the NSF Engineering Research Center for Cell Manufacturing Technologies (CMaT) at Georgia Tech.

This year’s class of BMES Fellows, Temenoff says, “comprises peers whom I have admired for years, so I am deeply grateful to be included. I look forward to many more years of engagement with the Society to promote the rich exchange of scientific ideas, but also as a way to introduce a wide and diverse audience to the exciting and impactful things biomedical engineers can do.”