How Do People Respond to Being Touched by a Robot?

How Do People Respond to Being Touched by a Robot?
Charlie Kemp's lab investigates how people react to a robot in a healthcare setting.
October 7, 2016 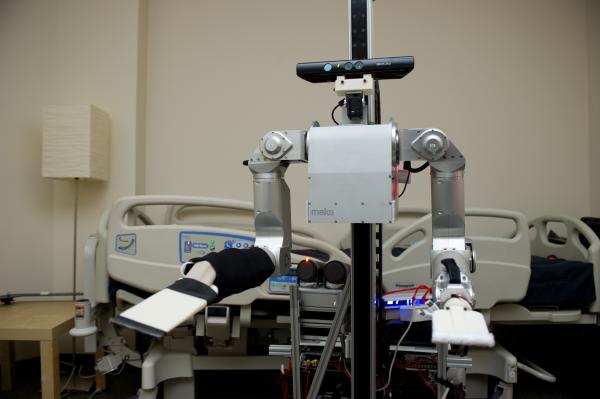 Cody, a robot in Charlie Kemp's Healthcare Robotics Lab at Georgia Tech, was used in a study testing how subjects responded to being touched by a robot in a healthcare setting. In this initial test, researchers found that the subjects' perception of Cody's intent made a significant difference in how they responded. In this photo, Cody sports new Xbox 360 Kinect headgear, gear that he didn't have in the initial study.  Photo: Rob Felt/Georgia Tech 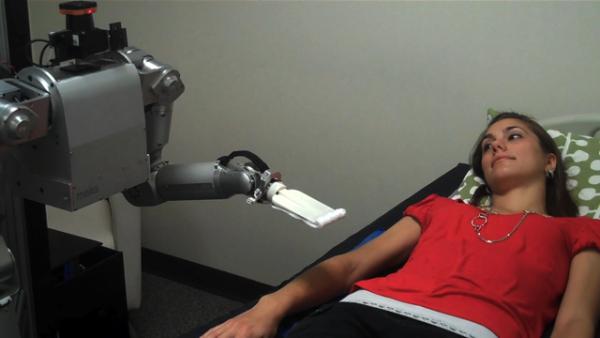 For people, being touched can initiate many different
reactions from comfort to discomfort, from intimacy to aggression. But how
might people react if they were touched by a robot? Would they recoil, or would
they take it in stride? In an initial study, researchers at the Georgia
Institute of Technology found people generally had a positive response toward
being touched by a robotic nurse, but that their perception of the robot’s
intent made a significant difference. The research is being presented today at
the Human-Robot Interaction conference in Lausanne, Switzerland.

“What we found was that how people perceived the intent of the
robot was really important to how they responded. So, even though the robot
touched people in the same way, if people thought the robot was doing that to
clean them, versus doing that to comfort them, it made a significant difference
in the way they responded and whether they found that contact favorable or
not,” said Charlie Kemp, assistant professor in the Wallace H. Coulter
Department of Biomedical Engineering at Georgia Tech and Emory University.

“There have been studies of nurses and they’ve looked at how
people respond to physical contact with nurses,” said Kemp, who is also an
adjunct professor in Georgia Tech’s College of Computing. “And they found that,
in general, if people interpreted the touch of the nurse as being instrumental,
as being important to the task, then people were OK with it. But if people
interpreted the touch as being to provide comfort … people were not so
comfortable with that.”

In addition, Kemp and his research team tested whether people
responded more favorably when the robot verbally indicated that it was about to
touch them versus touching them without saying anything beforehand.

“The results suggest that people preferred when the robot did
not actually give them the warning,” said Tiffany Chen, doctoral student at
Georgia Tech. “We think this might be because they were startled when the robot
started speaking, but the results are generally inconclusive.

Since many useful tasks require that a robot touch a person,
the team believes that future research should investigate ways to make robot
touch more acceptable to people, especially in healthcare. Many important
healthcare tasks, such as wound dressing and assisting with hygiene, would
require a robotic nurse to touch the patient's body,

“If we want robots to be successful in healthcare, we’re going
to need to think about how do we make those robots communicate their intention
and how do people interpret the intentions of the robot,” added Kemp. “And I
think people haven’t been as focused on that until now. Primarily people have
been focused on how can we make the robot safe, how can we make it do its task
effectively. But that’s not going to be enough if we actually want these robots
out there helping people in the real world.”