Georgia Tech Researchers Discover New Tri-Molecular Complex
A group of Georgia Tech researchers has discovered a new type of molecular interaction that could have important implications in preventing the spread of tumors and cancerous cells.
October 7, 2016 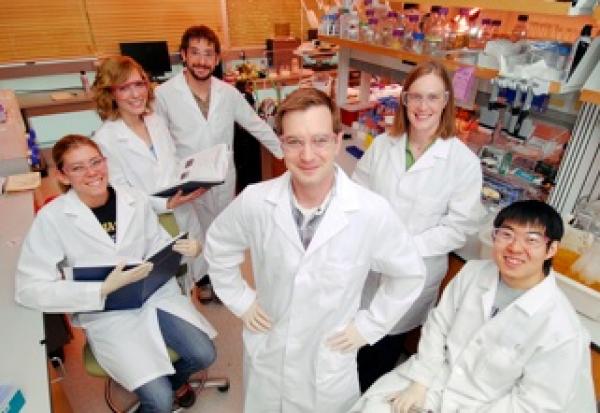 A group of Georgia Tech researchers has discovered a new type of molecular interaction that could have important implications in preventing the spread of tumors and cancerous cells.

Working within Georgia Tech’s Wallace H. Coulter Department of Biomedical Engineering, the researchers found a unique trimolecular relationship between Thy-1, a lipid tether protein; α5β1, a transmembrane receptor; and Syn-4, another protein.

“When Thy-1 bonds with α5β1, they form what’s known as a slip bond, which is easily broken apart when force is applied. The same thing happens between Thy-1 and Syn-4,” said Dr. Thomas Barker, one of the lead authors. “But what we observed is that when all three molecules come together, they form what we call a catch bond. Instead of breaking apart when force is applied, a catch bond becomes stronger, almost like a finger trap.”

The research that led to the findings began as a weekend project sparked by one graduate student’s curiosity — a chance observation that turned into a full-scale research project.

“One of my classmates and I set off to try to understand how integrin receptors bind Thy-1 on a cell’s surface,” said Fiore, student researcher in Barker’s lab. “What we observed was this new receptor of Thy-1, and a new type of interaction neither of us had seen before.”

The group’s findings have implications for stopping the spread of cancerous tumors and healing persistent wounds, Barker said. Thy-1is a so-called “recruitment protein.” From its position on the outside of a cell, Thy-1 can “capture” other proteins that are flowing through the bloodstream. When a doctor removes a tumor, for example, the tumor itself is gone, but cancerous cells may still be present in the bloodstream. These findings demonstrate the potential to disrupt the interaction between an endothelial protein and the circulating tumor cell receptor that causes tumor metastasis.

“These findings could have implications for physicians treating unhealing wounds,” Barker said. “This understanding could be used to engineer stem cells to actively home to the unhealing region by injecting stem cells into the blood stream.”

To read the full findings in Nature Communications, click here.