The Force is with Muscle Spindles

The Force is with Muscle Spindles
Groundbreaking research from Ting lab could shed new light on movement disorders
November 17, 2017 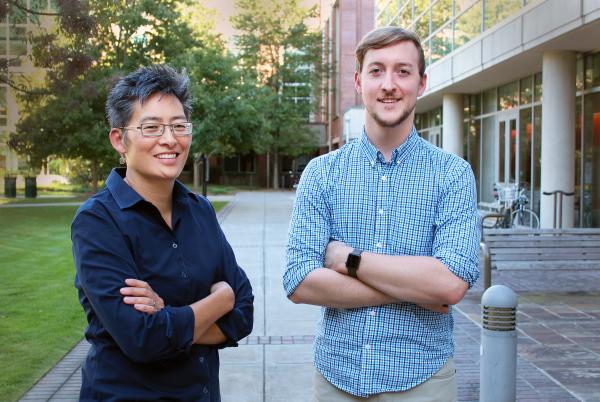 When you respond to something automatically, without thinking, it’s called a “knee-jerk reaction.” It’s an old idiom based on what happens when the doctor uses his little hammer to strike your patellar tendon, just below the knee. Your knee jerks suddenly. That’s called a patellar reflex, and it’s caused by the muscle spindles in your quadriceps.

Muscle spindles are skeletal muscle sensory receptors – a type of proprioceptor, which is a sensor that lets you do things like touch your finger to your nose when your eyes are closed, or play guitar without looking at the fretboard. Proprioceptors basically tell the brain where your body is and what it’s doing, and the brain analyzes the information, providing awareness of where your body is in space.

“They give rise to reflexes that help stabilize the body – this is what is tested when the doctor tests the knee-jerk response,” says Lena Ting, professor in the Wallace H. Coulter Department of Biomedical Engineering at Emory and Georgia Tech, and a researcher in the Petit Institute for Bioengineering and Bioscience.

Ting is very interested in muscle spindles, and the study of them fits squarely within her lab’s goal of understanding how the musculoskeletal system interacts with the nervous system to produce movement. “Specifically, we are interested in balance control and how the system degrades in conditions that make people prone to falling,” she says.

To that end, her lab has produced some cutting-edge research, published recently in Public Library of Science (PLOS) journal, Computational Biology. The work may alter long-established views of muscle spindles, how they work, and how they affect people with neurological challenges and other movement issues.

“The prevailing hypotheses about muscle spindles have been in place a long time – some of the research that has relied on these hypotheses may need to be reexamined in light of our study,” says Kyle Blum, a graduate student in Ting’s lab and lead author of the paper, “Force encoding in muscle spindles during stretch of passive muscle.”

In general, the idea established over the past 50 years or so, according to Ting, is that muscle spindles fire in response to, or encode, the length and velocity of the muscle.

“But we found that they fire in response to muscle force instead,” Ting says. “Time will tell, but I think this could ultimately be groundbreaking in how we understand movements and their disorders.”

Prior work by Ting’s group involved experimentally “pulling the rug out from under people,” which showed that the most rapid balance correcting response generated by the nervous system was related to acceleration signals originating from proprioceptive sensors in the muscles.

“This was puzzling, because this is not the standard description of proprioceptive sensory signals,” says Ting. “There had been some evidence of acceleration signals in muscle spindles, but it was not rigorously tested or broadly accepted.”

To see if human balance behavior could be explained by acceleration coding in muscle spindle sensors, Ting’s lab collaborated with investigators in Paris (where she’d been a postdoctoral researcher) who were doing advanced electrophysiological research, directly recording from sensory neurons as they fire during carefully imposed accelerations while stretching a muscle. In order to gather the right data, Ting developed customized computer programs to change the way standard muscle testing equipment generates experimental stretches.

There are two main aspects of sensory coding. The first, “is the mechanical signals being transformed into neural signals by the receptors themselves. The second is how the brain interprets these signals, giving rise to perception,” says Ting, whose team looked specifically at the first aspect.

“These special conditions are also analogous to conditions causing perceptual illusions or error in limb position and movement," Ting adds. "Therefore, our brains are interpreting a muscle force-dependent signal as joint position and velocity. This works well most of the time, but other times it can cause incorrect or illusory sensations.”

Imagine standing in an open doorway and moving your arms outward to press the door frame. You push as hard as you can for about a minute. Then leave the doorway, and though you may feel like your arms are at your side, they are actually floating effortlessly upward, pressing against a door frame that is no longer there.

Usually, these “illusory sensations” do not affect our movements very much, “but where it really matters is when there is abnormal muscle force or reflexes in neurological disorders, which underlies a number of poorly-understood motor disorders, such as spasticity, rigidity, and dystonia,” says Ting. “The findings have implications in the study of impaired reflexes. Shifting how we understand the function of muscle proprioceptors can give us insight into these debilitating conditions.”

Ting’s team is now developing computational simulations that would allow them to predict the firing of muscle spindles during measured behaviors, such as balance control in humans.

“We want to develop methods that allow us to predict what is happening in the nervous system when we measure someone’s balance, or perform a knee-jerk response,” says Ting, whose co-authors included (in addition to lead-author Blum), Boris Lamonte D’Incamps and Daniel Zytnicki, both based at Université Paris Descartes.

Ting set out to understand how balance is impaired in sensory neuropathy, and she believes the research will help clarify how balance is impaired in Parkinson’s disease and other neurological disorders. She wants to develop simulation of the fundamental stretch reflex response underlying those knee-jerk reactions, something that has always been difficult because of the long-held hypothesis about muscle spindles being sensitive to the length and velocity of muscles.

“But we now believe they are sensitive to the force and the rate change in force of muscle spindle fibers,” she says. “This finding may explain a lot of previously unexplained phenomena we see in sensorimotor behaviors and impairments.”