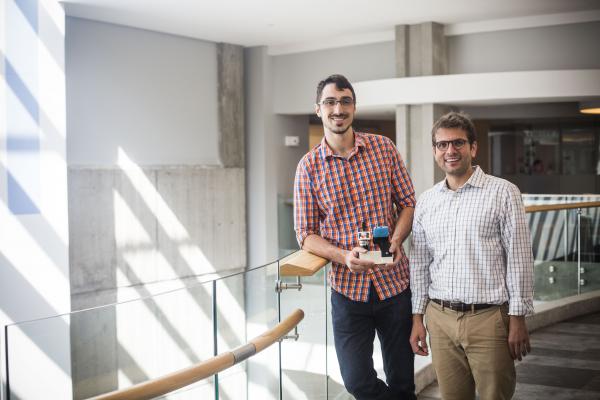 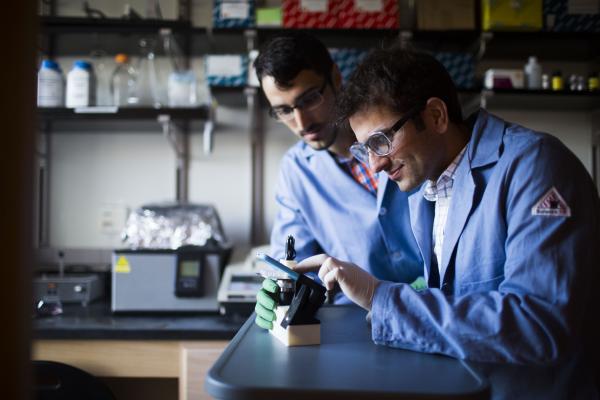 The Collegiate Inventors Competition has selected a team of two Georgia Tech and Emory graduate students as finalists in its 2016 annual competition. Aaron Blanchard and Kevin Yehl are students in the Wallace H. Coulter Department of Biomedical Engineering at Georgia Tech and Emory University and in Emory’s Laney Graduate School. Their advisor, Khalid Salaita, Ph.D., is associate professor of chemistry in Emory College. The team is one of only six graduate teams and five undergraduate teams selected nationally.

The Emory-Georgia Tech team invented Rolosense, a DNA-powered diagnostic machine that turns chemical energy into rolling motion. This molecular vehicle carries a bead just five microns in diameter at speeds 1,000 times faster than previous motors. The speed of the bead through a sample can indicate the presence of a single gene variation or detect a variety of molecules such as lead using a smartphone application. This could make advanced testing for diseases and contaminants more efficient in remote areas when it’s needed most.

Founded in 1990, the Collegiate Inventors Competition recognizes and rewards the nation’s top collegiate inventors. In partnership with the United States Patent and Trademark Office (USPTO), the Collegiate Inventors Competition is the nation’s foremost competition encouraging innovation, entrepreneurship, and creativity in students who are working on cutting-edge inventions at their colleges and universities. The Competition is a program of the National Inventors Hall of Fame and is sponsored by the United States Patent and Trademark Office (USPTO) and AbbVie Foundation, with additional support from Arrow Electronics.

Each year, individuals representing a broad cross-section of technological fields serve as first round judges, evaluating entries based on originality of the idea, process (or technology used), level of student initiative, and potential value and usefulness to society.

The Finalists will travel to Alexandria, Va., to present their inventions to an esteemed panel of final round judges, comprising the most influential inventors and invention experts in the nation – National Inventors Hall of Fame Inductees, United States Patent and Trademark Office (USPTO) experts, and AbbVie scientists. The top three entries in the undergraduate and graduate divisions will receive cash prizes.

The Awards Ceremony will take place on Nov. 4, 2016, at the USPTO Madison Building in Alexandria, Va. Before the ceremony, from 11 a.m.-noon, competition finalists will showcase their inventions and interact with thousands of USPTO patent and trademark examiners, sponsors, media, and the public at the Collegiate Inventors Competition Expo, which is free and open to all in the community.

“The USPTO is proud to host the 2016 Collegiate Inventors Competition,” says Michelle K. Lee, Under Secretary of Commerce for Intellectual Property and Director of the USPTO. “Each year, these students bring innovation to the forefront, developing unique solutions to real world problems. As we continue to promote innovation, we are inspired by the young entrepreneurs who provide us with a glimpse into the future of American technological advancement.”

About the Collegiate Inventors Competition

For 25 years, the Collegiate Inventors Competition (as part of the National Inventors Hall of Fame) has recognized and rewarded graduate and undergraduate students who are committed to research, discovery, invention, and innovation as they address the problems of today's world. The Competition specifically recognizes and rewards the innovations, discoveries, and research by college and university students and their advisors for projects leading to inventions that may have the potential of receiving patent protection. Introduced in 1990, the Competition has awarded more than $1 million to winning students for their innovative work and scientific achievement through the help of its sponsors.

About the National Inventors Hall of Fame

The National Inventors Hall of Fame (NIHF) is the premier non-profit organization in America dedicated to recognizing inventors and invention, promoting creativity, and advancing the spirit of innovation and entrepreneurship. Founded in 1973 in partnership with the United States Patent and Trademark Office, NIHF is committed to not only honoring the individuals whose inventions have made the world a better place, but also to ensure American ingenuity continues to thrive in the hands of coming generations through its national, hands-on educational programming and challenging collegiate competitions focused on the exploration of science, technology, engineering, and mathematics. To date, NIHF has served over 1 MILLION children and 125,000 educators and interns, and awarded more than $1 million to winning college students for their innovative work and scientific achievement through the help of its sponsors.