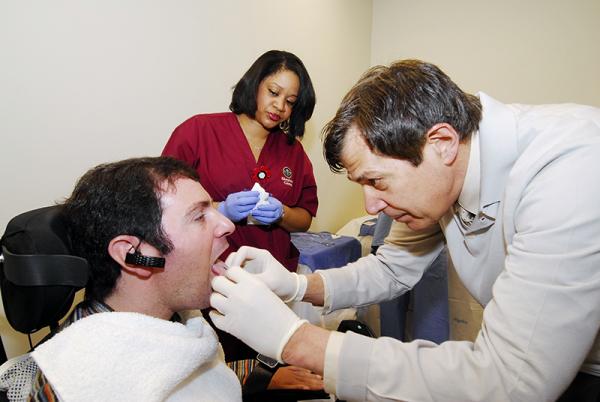 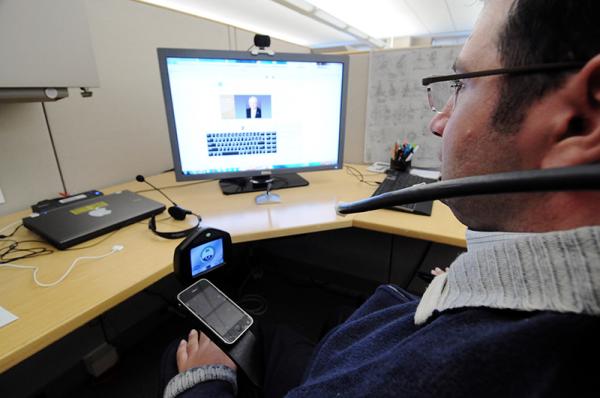 The Tongue Drive System not only controls wheelchairs, but also allows users to access computers and smartphones. Credit: Shepherd Center 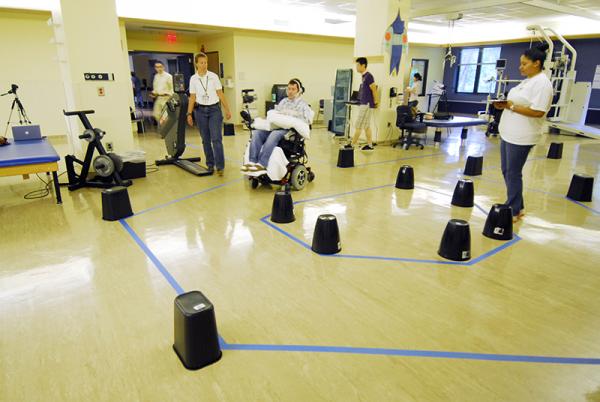 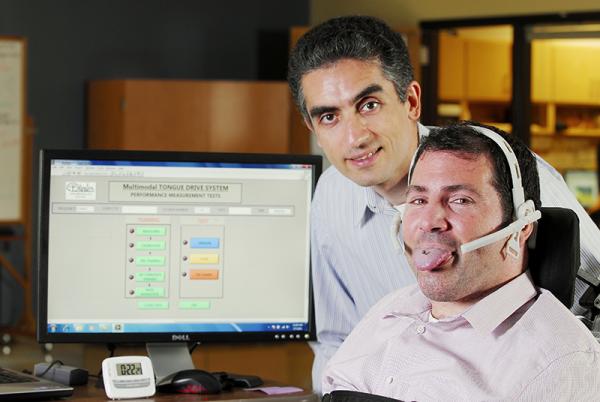 After a diving accident left Jason DiSanto paralyzed from the neck down in 2009, he had to learn how to navigate life from a powered wheelchair, which he controls with a sip-and-puff system. Users sip or puff air into a straw mounted on their wheelchair to execute four basic commands that drive the chair. But results from a new clinical study offer hope that sip-and-puff users like DiSanto could gain a higher level of independence than offered by this common assistive technology.

In the study, individuals with paralysis were able to use a tongue-controlled technology to access computers and execute commands for their wheelchairs at speeds that were significantly faster than those recorded in sip-and-puff wheelchairs, but with equal accuracy. This study is the first to show that the wireless and wearable Tongue Drive System outperforms sip-and-puff in controlling wheelchairs. Sip-and-puff is the most popular assistive technology for controlling a wheelchair.

The Tongue Drive System is controlled by the position of the user’s tongue. A magnetic tongue stud lets them use their tongue as a joystick to drive the wheelchair. Sensors in the tongue stud relay the tongue’s position to a headset, which then executes up to six commands based on the tongue position.

The Tongue Drive System holds promise for patients who have lost the use of their arms and legs, a condition known as tetraplegia or quadriplegia.

“It’s really easy to understand what the Tongue Drive System can do and what it is good for,” said Maysam Ghovanloo, an associate professor in the School of Electrical and Computer Engineering at the Georgia Institute of Technology, and a study co-author and principal investigator. “Now, we have solid proof that people with disabilities can potentially benefit from it.”

The study was published on Nov. 27 in the journal Science Translational Medicine. The National Institute of Biomedical Imaging and Bioengineering and the National Science Foundation funded the research. Scientists from Shepherd Center in Atlanta, and the Rehabilitation Institute of Chicago and the Northwestern University Feinberg School of Medicine in Chicago were also involved in the study. Jeonghee Kim and Hangue Park, who are working on the Tongue Drive System as graduate students at Georgia Tech, are co-authors of the study.

“The Tongue Drive System is a novel technology that empowers people with disability to achieve maximum independence at home and in the community by enabling them to drive a power wheelchair and control their environment in a smoother and more intuitive way,” said

Northwestern co-lead investigator Elliot Roth, M.D, chair of physical medicine and rehabilitation at Feinberg and the medical director of the patient recovery unit at Rehabilitation Institute of Chicago. “The opportunity to use this high-tech innovation to improve the quality of life among people with mobility limitations is very exciting.”

The research team had subjects complete a set of tasks commonly used in similar clinical trials. Subjects in the trials were either able-bodied or people with tetraplegia.

“By the end of the trials, everybody preferred the Tongue Drive System over their current assistive technology,” said Joy Bruce, manager of Shepherd Center’s Spinal Cord Injury Lab and co-author of the study. “It allows them to engage their environment in a way that is otherwise not possible for them.”

Researchers compared how able-bodied subjects were able to execute commands either with the Tongue Drive System or with a keypad and mouse. For example, targets randomly appeared on a computer screen and the subjects had to move the cursor to click on the target. Scientists are able to calculate how much information is transferred from a person’s brain to the computer as they perform a point-and-click task. The performance gap narrowed throughout the trial between the keypad and mouse and the Tongue Drive System.

“That was a very exciting finding,” Ghovanloo said. “It attests to how quickly and accurately you can move your tongue.”

The idea for piercing the tongue with the magnet was the inspiration of Anne Laumann, M.D., professor of dermatology at Feinberg and a lead investigator of the Northwestern trial. She had read about an early stage of Tongue Drive System using a glued-on tongue magnet. The problem was the magnet fell off after a few hours and aspiration of the loose magnet was a real danger to these users.

“Tongue piercing put to medical use — who would have thought it? It is needed and it works!” Laumann said.

The experiments were repeated over five weeks for the able-bodied test group, and over six weeks for the tetraplegic group. All of the subjects with tetraplegia were able to complete the trial, which Ghovanloo called an “exciting” and “major finding.”

The tetraplegic group was using the Tongue Drive System just one day each week, but their improvement in performance was dramatic.

“We saw a huge, very significant improvement in their performance from session one to session two,” Ghovanloo said. “That’s an indicator of how quickly people learn this.”

The Tongue Drive System isn’t quite ready for commercialization, but Ghovanloo’s startup company, Bionic Sciences, is working with Georgia Tech to move the technology forward.
Ghovanloo is the foundering director of the GT-Bionics Laboratory, where his team is experimenting with other devices to improve the quality of life for individuals with disability.

“All of my projects are related to helping people with disabilities using the latest and greatest technologies,” Ghovanloo said. “That’s my goal in my professional life.”

DiSanto hopes that the one day he’ll be able to use a tongue-powered wheelchair outside of the hospital, which would help him gain some independence he lost after his diving accident.

"The Tongue Drive System will greatly increase my quality of life when I can start using it everywhere I go,” DiSanto said. “With the sip-and-puff system, there is always a straw in front of my face. With the Tongue Drive, people can see you, not just your adaptive equipment."

This research is supported by the National Institute of Biomedical Imaging and Bioengineering under award number 1RC1EB010915, and by the National Science Foundation under awards CBET-0828882 and IIS-0803184. Any conclusions or opinions are those of the authors and do not necessarily represent the official views of the sponsoring agencies.

Dr. Ghovanloo's company, Bionic Sciences, is negotiating with the Georgia Tech Research Corporation for a license to the technologies discussed in this article. If the license is executed, the results of his research on the Tongue Drive System could affect his personal financial status. Dr. Ghovanloo's Conflict of Interest has been reviewed and approved by Georgia Tech in accordance with its conflict of interest policies.