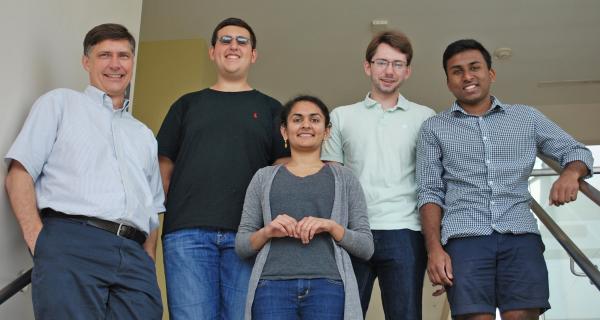 Bhargav Earla was a typical nervous freshman when he arrived at the Georgia Institute of Technology to begin his studies in the Wallace H. Coulter Department of Biomedical Engineering (BME).

He was stressed out a lot, had a hard time making friends and finding the right balance between school and the rest of his life.

Then he got a mentor. And in a way, it was the beginning of a new family for him.

“I always tell people there’s been a huge change between my freshman year and now, and the change is not academics,” says Earla, a third-year BME undergraduate student. “Obviously, I’ve learned lot in classes, but that was going to happen anyway. It’s my confidence that’s changed. That’s been the biggest difference.”

Earla joined the BME Undergraduate Mentor Program, which means he has become part of a growing family tree of mentors, with Dhara Patel at or near the top, as outgoing chair of the BME Learning Commons Leadership Program, and one of the students who helped develop the mentoring program.

“The program is still a work in progress – a learning process. I don’t think that will ever change,” says Patel, a fourth-year BME undergraduate student who has been involved with Learning Commons leadership (the commons is located on the fourth floor of the Whitaker Building) and the mentorship program since they were launched in 2014.

According to Joe Le Doux, BME associate professor and associate chair for undergraduate learning and experience, “the Learning Commons is about giving student leaders a chance to create meaningful change in the lives of BME students. And the mentorship program is the most important program the student leaders developed.”

As the program has evolved, improving how it matches students with mentors (a face-to-face “speed dating” meet-up is part of the process), its impact is spreading across the Georgia Tech campus. According to Le Doux, recent BME graduate Bharat Sanders (who helped start the mentorship program) modeled the BME program in creating the campus-wide, student-managed K.N.I.T. Mentorship program.

Patel is typical of the original student leaders who created the program – all in, totally committed. She’s mentored at least six students so far, some who have gone on to become BME mentors, and have started begetting more mentors along the way.

Take Subhi Al-jabi, for example. He’s a second-year student that found an excellent match in Sydney Fain as a mentor. Patel is her mentor, so Al-jabi calls Patel, “my grand-mentor. So it’s like I have two mentors, Sydney and Dhara.”

There is something like an intergenerational family dynamic going on. Fain introduced Al-jabi to Patel, and The three of them – Patel, Fain and Al-jabi – go to lunch together, compare notes, help each other out. This year, Al-jabi has taken on a mentee, which means Patel is now a great-grand mentor.

“I should probably feel old by now,” says Patel, who describes her relationship with her grand-mentee, Al-jabi, as, “more like a friendship, with a little bit of mentoring thrown in.”

That’s kind of how Earla describes his relationship with his mentor, fourth-year undergraduate Andrew Akers who, like Patel, has been in the program since its start, and has mentored 10 fellow students so far. The friendship part is key, but so is the useful advice, based on experience.

Creating a healthy balance between classes, labs, and a social life are critical, says Akers, who recalls an early meeting with his mentee, Earla.

“Bhargav’s entire focus was, he had to do really, really well in class, because he wants to go to med school,” Akers notes. “It was the second wave of midterms his first year, and he was having a freakout. So we went to dinner and I told him he didn’t need to worry about it. He was already a great student, so I told him, ‘when you sit down and look at what’s important 20 years from now, it’s not going to matter if you had a 4.0 or a 3.8. What will matter is that you made some good friends and found something that you enjoy doing – maybe hiking or kayaking – that really adds to your quality of life.”

According to Earla, Akers showed him the ropes, taught him about choosing the right professor, about scheduling classes, about time management.

“But he also made sure that I was personally alright, not too stressed out,” says Earla, who made Akers a grand-mentor this year by taking on a mentee of his own (freshman Omari Weems, a former Project Engages high school student in the Petit Institute for Bioengineering and Bioscience).

“Basically, he’s always tried to make sure that I was doing as well personally as I was academically,” adds Earla, now part of the leadership committee that manages the mentoring program. “That’s where mentorship really becomes important. You can personally invest yourself in someone. He willingly invested his time in me.”

It’s something Earla intends to do with Weems, a paying-it-forward ideal that has grown organically among participating BME students, which does not surprise Le Doux.

“Mentorship is a two-way street,” explains Le Doux. “I’ve heard that time and time again. It works best when the mentor and mentee can connect personally and see the value in the relationship.”

From his vantage point, Akers can see the value clearly.

“Everyone has struggles, it doesn’t matter who you are,” he says. “Being able to guide someone through challenging times, mentoring someone that you want to do better than you did, is one of the most rewarding experiences you can have.”