APDC Picks Best of the Best 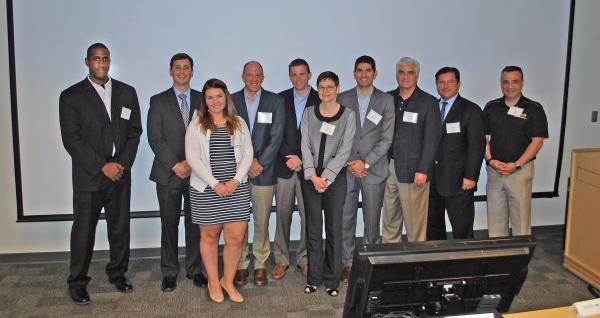 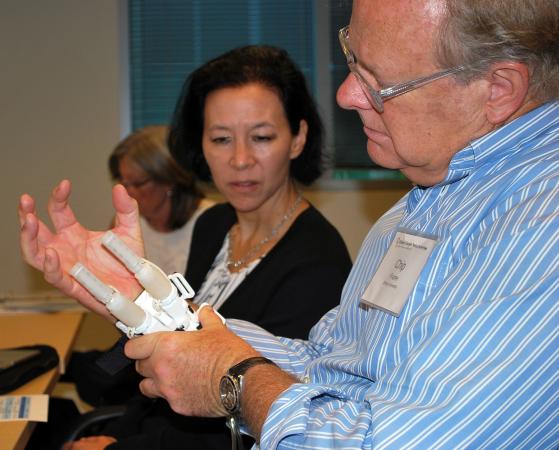 APDC executive committee members Charles Frame and Traci Leong check out one of the devices submitted for consideration at the innovation competition. 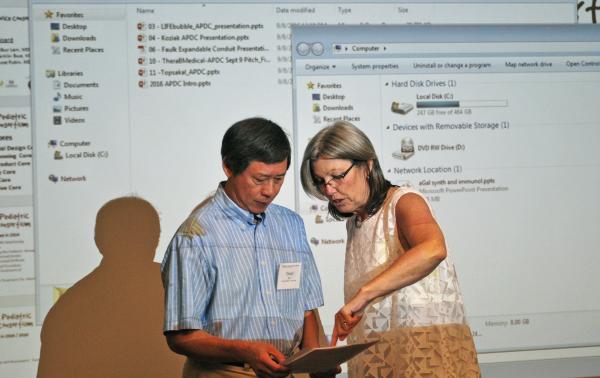 A device to measure a child’s pain. A video game to treat lazy eye. A tool that assesses concussions in real time. These are just some of the innovative medical device projects that were selected to receive critical seed funding when the Atlantic Pediatric Device Consortium (APDC) hosted its sixth annual innovation competition in September at the Petit Institute for Bioengineering and Bioscience.

Six projects in all, designed to improve the healthcare options for children, emerged as the big winners in the annual competition, an opportunity for the scientific and business community (entrepreneurs, clinicians, scientists, businesses, academic researchers, graduate and undergraduate students) to develop and commercialize a pediatric medical device.

The winners (which included Michelle LaPlaca, Petit Institute researcher and associate professor in the Wallace H. Coulter Department of Biomedical Engineering) were selected from 11 finalists who presented their projects in front of a review committee, the APDC Executive Board, and an audience of their peers, during September’s event.

The six awardees represent a wide range of projects. Here’s a rundown:

The Device: This is a multi-modal tool for objective concussion assessment that can be deployed in real-time to aid in medical decision-making in non-traditional environments. In contrast to currently marketed technologies, this tool incorporates the three key pillars of concussion assessment (neuropsychological, balance, and oculomotor testing) within a single unit that is portable, rapid, and simple to use.

The Device: Based on proven CorMatrix products and technology, this regenerating tubular Extracellular Matrix (ECM) mitral valve replacement remodels into a patient’s own tissue by the attraction of host cells and stem cells to the matrix. Over the course of several months the valve matrix will be infiltrated with host cells that will slowly remodel it into a functional mitral valve with growth potential.

Project: Binocuclear, a binocular medical device for the treatment of amblyopia

The Device: Binocuclear is a novel and patented medical device for the treatment of amblyopia, an ocular disorder also known as "lazy eye" that develops in infancy or early childhood. The binocular game is pre-loaded in a gaming device (iPad or a similar tablet device) and prescribed by a physician.

The Device: The LifeFlow™ rapid infuser is a single-use, hand-operated device that allows health care providers to quickly and efficiently deliver recommended fluid volumes, improving the care of children with sepsis, a potentially life-threatening complication of infection and a leading cause of childhood death worldwide.  The device also has the potential to improve care in other conditions where rapid volume infusion is required.

Project: AlgometRx, a novel device and method for the objective measurement of pain and analgesic drug effect in children

The Device: AlgometRx integrates a novel smartphone-based pupillometer and a specific neuro neuro-stimulator. The device measures objective pupillary constriction and dilation to gather vital data about a patient’s pain experience or drug effect that can be recorded, characterized and assessed.

The six projects that were awarded seed grants are placed under contract to APDC to complete a specific set of tasks that move their pediatric medical device project along the product development pathway – a route to market defined by the Food and Drug Administration (FDA) as concept to prototype to pre-clinical to clinical to manufacturing to marketing, right on to commercial use.

With funding from the FDA Office of Orphan Products Development, the APDC’s mission is to enhance the lives of children through the development of novel, safe, and effective pediatric medical devices. The consortium fosters an environment of creativity, where innovative ideas are reviewed, tested, and developed by a multidisciplinary team of experts from Georgia Tech, Emory, Virginia Commonwealth University, and Children’s Healthcare of Atlanta.