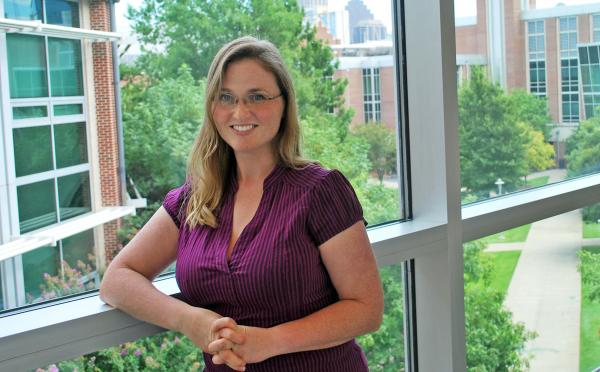 Annabelle Singer, assistant professor in the Wallace H. Coulter Department of Biomedical Engineering at the Georgia Institute of Technology and Emory University, was named today by the David and Lucile Packard Foundation one of 18 recipients of the prestigious 2017 Packard Fellowships for Science and Engineering.

Fellows, who are considered among the most innovative early-career scientists in the nation, will each receive $875,000 over five years to pursue their research.

“The expectation with this fellowship is that you will tackle big problems,” said Singer, also a researcher with the Petit Institute for Bioengineering and Bioscience at Georgia Tech. “This gives us the freedom to pursue some outside-the-box projects that could be really impactful. Unlike most grants, there are very few funding restrictions, meaning we can go wherever the science takes us.”

The Packard Fellowships are among the nation’s largest nongovernmental fellowships, designed to allow maximum flexibility in how the funding is used. Packard Fellows have gone on to achieve significant accomplishments, receiving additional awards and honors that include the Nobel Prize in Physics, the Fields Medal, the Alan T. Waterman Award, MacArthur Fellowships, and elections to the National Academies. Their work has led to impressive research outcomes, including the development of the CRISPR-Cas9 gene-editing technique, sequencing the Ebola virus genome, the creation of Bose-Einstein condensates, and pioneering research on glaciology and abrupt climate change.

“These scientists and engineers are tackling unanswered questions and pushing the boundaries of their fields,” said Frances Arnold, Chair of the Packard Fellowships Advisory Panel and former Packard Fellow, of this year’s class. “Their innovations could lead to breakthroughs in how we live our lives and our understanding of nature. Is there another planet in our solar system? Can we find a way to predict earthquakes? Can learning more about how we make memories help us preserve them? If past fellowships are any indication, the possibilities are boundless.”

Singer sees the fellowship as validation for her research, which employs novel techniques to identify and restore failures in brain activity that lead to memory impairment.

“Ultimately our goal is to understand how neural activity both produces memories and protects brain health and then use this knowledge to engineer neural activity to repair brain function,” she said. “Using non-invasive approaches, we’re working to develop new ways to treat diseases that affect memory, like Alzheimer’s, for which there are no effective therapies.”

Since 1988, the foundation has awarded $394 million to support 577 scientists and engineers from 54 universities.  The fellowships program was inspired by David Packard’s commitment to strengthen university-based science and engineering programs in the United States, recognizing that the success of the Hewlett-Packard Company, which he cofounded, was derived in large measure from research and development in university laboratories.

This year, the foundation increased its overall grant budget in response to new challenges to promote stronger national support for science and greater reliance on evidence-based decision-making. The Packard Foundation’s work is grounded in science and research to ensure its investments have lasting impact.

Each year, the foundation invites 50 universities to nominate two faculty members for consideration. The Packard Fellowships Advisory Panel, a group of 12 internationally-recognized scientists and engineers, evaluates the nominations and recommends fellows for approval by the Packard Foundation Board of Trustees.

“It’s great to know that some really smart people think our research plans are worth supporting,” said Singer. “Current and former Packard Fellows are a very impressive group so it’s an honor to be among them.”

Singer believes the fellowship is a reflection on the work being done at Emory and Georgia Tech.

“We’re in the midst of a big plan to expand neuroscience, and I hope this will help get the word out that it's a great place to do cutting edge neuroscience and neuroengineering,” she said.

Packard Fellows must be faculty members who are eligible to serve as principal investigators on research in the natural and physical sciences or engineering, and must be within the first three years of their faculty careers. Disciplines that are considered include physics, chemistry, mathematics, biology, astronomy, computer science, earth science, ocean science, and all branches of engineering.

Meet the recipients of the 2017 Packard Fellowships in Science and Engineering:

The human musculature consists of tightly bundled fibers that are capable of changing their size, shape, and mechanical properties. Barnes’ lab explores the design and synthesis of functional polymer-based materials, for the development of non-toxic combination drug delivery systems, stimuli-responsive materials, new polymer architectures, and templates for biomacromolecules. They hope to find macromolecular solutions to major challenges in chemistry, medicine, and materials science.

Division of Geological and Planetary Sciences, California Institute of Technology

The most distant bodies within an expansive field of icy debris beyond Neptune’s orbit have a peculiar orbital alignment, and collectively point to the existence of an additional, Neptune-like planet in the solar system. Batygin plans to conduct an extensive suite of theoretical and numerical calculations that will identify the distant planet’s location, and discover it observationally, seeking to unravel the dramatic narrative of the formation and evolution of planetary systems.

Bacteria can rapidly adapt to changing environmental conditions by incorporating novel DNA into their genomes. This process of gene transfer underlies the spread of antibiotic resistance among the world’s most notorious pathogens. Brito’s lab is developing new tools to better predict the spread of genes in natural microbial communities.

Inspired by the amazing and complex interactions between organ systems, the Hsiao lab is studying how changes in the microbiome and immunity impact brain function and behavior. They aim to uncover mechanisms for communication between gut bacteria, immune cells, and neurons, toward understanding how these signaling pathways impact neurological disease.

Department of Materials Science and Engineering, University of Illinois, Urbana-Champaign

Huang’s research develops techniques that use electron microscopes to characterize matter with single atom precision, with the ultimate goal of enabling an era in which materials can be designed and perfected at the level of individual atoms.

The Keplinger Research Group aims to synergize concepts from soft matter physics and polymer chemistry with advanced engineering technologies in order to solve problems that impede human progress. Their current research is focused on the development of high-performance, self-healing artificial muscles, as well as on generating sustainable energy from untapped sources of renewable energy, such as ocean waves.

Department of Astronomy and Astrophysics, University of California, Santa Cruz

Understanding the nature of dark energy and dark matter, which together make up 95% of the mass-energy density of the current-day universe, are two of the most fundamental questions in modern physics. Leauthaud-Harnett’s group specializes in the design, analysis, and theoretical interpretation of maps of the sky containing millions of galaxies, in order to characterize dark energy and understand how galaxies and dark matter structures grow with time.

Turbulence is among the most mysterious phenomena in nature, with extensive ramifications in biology, mathematics, and physics. Using a novel experimental approach, Navon’s research group synthesizes highly-controllable quantum matter to explore complex many-body phenomena in extremely pure conditions: from the production of new quantum phases of matter, to the study of turbulence in dilute quantum fluids.

Department of Chemistry and Biochemistry, University of California, Los Angeles

Nelson’s lab is focused on discovering new chemical reactions that will enable the efficient and environmentally-benign syntheses of fuels, materials, and medicines. They take an interdisciplinary approach, exploring novel concepts in chemical catalysis that lie at the interface of organic synthesis, inorganic chemistry, and molecular biology.

Microbes are the catalysts and engines that drive major element cycles on Earth, yet the vast majority of microbes are known only as DNA sequences. The Osburn Lab seeks to cultivate environmental microbes from deep underground to better understand both the microbes and their role in shaping the Earth.

Pardon’s research explores problems in geometry and topology (the study of shapes up to continuous deformation) and related fields. Although topological problems are insensitive to the geometry of objects in question, geometric structures often play an unexpected role in the answer to topological questions.

Rechtsman’s lab studies the physics of light propagating through complex structures, combining experiments and theory to study the interplay between structure and function. They seek to demonstrate new fundamental physics, as well as device designs that have potential application in medical imaging, high-power lasers, and solar energy.

Singer’s research uses novel techniques to identify and restore failures in brain activity that lead to memory impairment. Using non-invasive approaches, she is translating her discoveries from rodents to develop radically new ways to treat diseases that affect memory in humans, like Alzheimer’s.

What is it about the human mammalian brain that allows us to learn our language? The Yartsev lab studies the neural basis of complex spatial and acoustic behaviors, and uses cutting-edge technologies to examine one of the only known vocal learning mammals: the bat. Yartsev’s lab hopes to uncover the mysterious neurobiological underpinning of language learning in the mammalian brain.

What can the atmosphere tell us about the state of a planet? Using the Earth as a test case, Yeung is developing a toolkit for uncovering how a planet’s atmosphere can broadcast its geological, biological, and climatic machinery through patterns in its chemical and isotopic composition.

For more detailed information on each of the Fellows, please visit the Fellowship Directory.

About the Packard Fellowships for Science and Engineering

For 29 years, the Packard Fellowships for Science and Engineering program has awarded $394 million to support 577 scientists from 54 top national universities. It is among the nation's largest nongovernmental fellowships, designed with minimal constraints on how the funding is used to give the Fellows freedom to think big and look at complex issues with a fresh perspective. Packard Fellows have gone on to receive additional awards and honors, including the Nobel Prize in Physics, the Fields Medal, the MacArthur Fellowships, and elections to the National Academy of Sciences and the National Academy of Engineering. Visit the Packard Fellowships for Science and Engineering webpage to learn more about the program and watch a video about the Fellowships.

About the David and Lucile Packard Foundation

David and Lucile Packard Foundation is a private family foundation created in 1964 by David Packard (1912–1996), cofounder of the Hewlett-Packard Company, and Lucile Salter Packard (1914–1987). The Foundation provides grants to nonprofit organizations in the following program areas: Conservation and Science; Population and Reproductive Health; Children, Families, and Communities; and Local Grantmaking. The Foundation makes national and international grants and also has a special focus on the Northern California counties of San Benito, San Mateo, Santa Clara, Santa Cruz and Monterey. Foundation grantmaking includes support for a wide variety of activities including direct services, research and policy development, and public information and education. Learn more at www.packard.org.