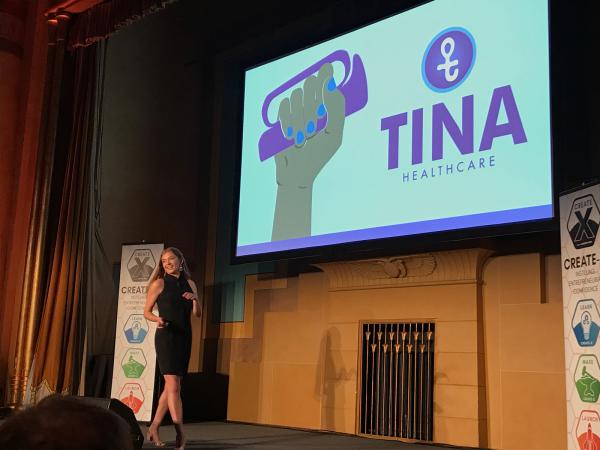 Sarah Bush and her startup, TINA, at CREATE-X Demo Day, held at the Fox Theatre in August 2018. 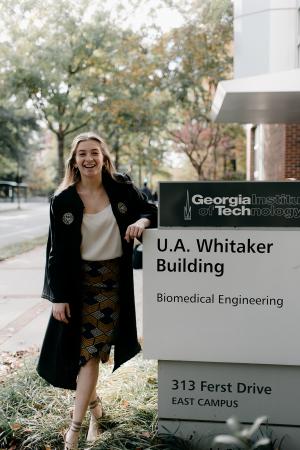 “The culture shock of coming here was so strong that I was ready to transfer after my first year,” recalls Los Angeles native Sarah Bush, a graduating biomedical engineer.

She had chosen Georgia Tech after touring the Wallace H. Coulter Department of Biomedical Engineering and meeting professors who instantly seemed accessible. “I felt invited to ask big questions, and assured that there would be an expert willing to engage with me.”

So, Bush packed up her belongings and traveled across the country to “get to work.” Though it was a tough adjustment at first, she eventually found her place here.

During the course of her undergraduate career, Bush has held two research and development-related internships; studied abroad in New Zealand, Australia, and Fiji; gained medical robotics research experience; and become the founder and CEO of a startup company.

“I know that there's something magic in the water here that converts intentions into reality,” she says. “It is an epicenter of technical expertise — and I have a well-rounded engineering toolkit as a result.”

Bush, who also has a minor in industrial design, put those tools to work when she joined CREATE-X, Tech’s pioneering entrepreneurship initiative. In her words, the experience “paved the road from class project to marketable technology, and undergraduate student to CEO.”

During the past two and a half years, she and her team have been developing TINA (Tampon Insertion Aid) Healthcare. TINA is a universal and ergonomic tool that helps women with limited dexterity, as well as new users, insert tampons. They participated in three campus entrepreneurship programs: InVenture Prize, Idea 2 Prototype, and Startup Launch.

“This exposure put us in front of venture capitalists, angel investors, senior executives, and the U.S. Secretary of Education,” Bush says. It also landed them on Atlanta Inno’s 25 Under 25 list of rising entrepreneurs and technologists. “We were provided with resources and a network of mentors just because we were hardworking students with an idea.” And that, she says, is what sets Tech apart.

One of the biggest takeaways from her undergraduate experience is “being comfortable with ambiguity. Half of the battle in solving a big problem is defining it and breaking it into approachable pieces. At Georgia Tech, I’ve been repeatedly exposed to this methodology, and I’m ready to apply it to each challenge to come.”

Another lesson was more surprising for Bush, who arrived on campus focused on the academic side of college. But she eventually, and happily, discovered “groups of artists, entrepreneurs, feminists, spiritualists, and friends who opened my eyes to the power of collaboration and a diverse community.”

After graduation, Bush plans to continue working on TINA and applying to bioengineering Ph.D. programs. She wants to put her technical and problem-solving skills to work in applying engineering solutions to health care challenges.

As the big day approaches, above all else Bush is grateful — for having not given up, and for finding so many ways to thrive at Tech, which “crafted me into the woman and engineer I am today.”