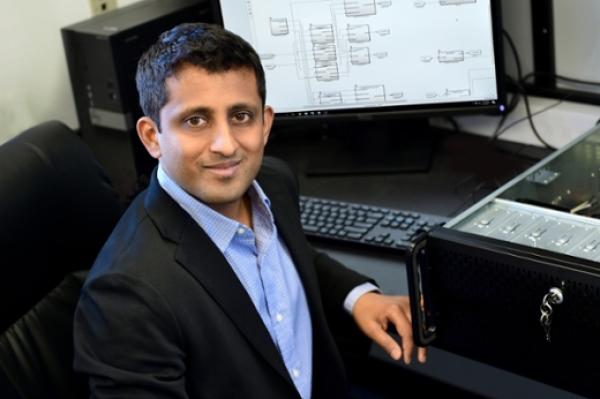 Chethan Pandarinath, assistant professor in the Wallace H. Coulter Department of Biomedical Engineering at Georgia Tech and Emory, has been awarded an Interdisciplinary Rehabilitation Engineering Research Career Development Grant (IREK12) through the National Institutes of Health (NIH). Pandarinath is also an assistant professor of neurosurgery at Emory University and a member of the Emory Neuromodulation Technology Innovation Center (ENTICe).

The grant, entitled “A novel brain-machine interface for rehabilitation,” aims to develop new strategies to help restore movement to people who are paralyzed, including those affected by spinal cord injury and stroke. Brain-machine interface systems interface directly with the brain to allow people with paralysis to control external assistive devices, such as robotic arms or exoskeletons, or to control the movement of their own limbs through direct electrical stimulation of muscles.

In previous work at Stanford, Pandarinath and colleagues developed brain-machine interfaces that focused on a particular portion of the brain known as the motor cortex. In the current study, Pandarinath, in collaboration with colleagues in the departments of Neurosurgery and Neurology at Emory, hopes to test whether multiple areas of the brain, which each control different aspects of movement, might provide complementary signals for controlling brain-machine interfaces.