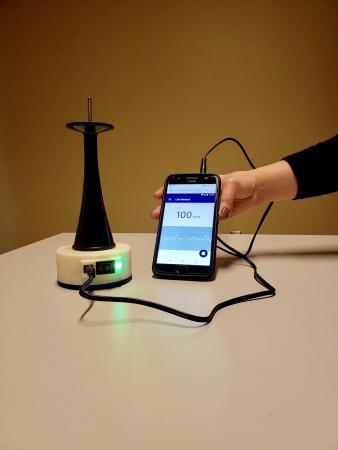 A team of students who gradutaed from Georgia Tech's MBID program created a company called TendoNova, one of five finalists in the NFL's 1st and Future competition.

Super Bowl LIII may not be remembered as one of the great games in the long history of National Football League championships, but the event that took over Downtown Atlanta will always be a highlight in the hearts and minds of the people behind TendoNova.

The startup business that was born in the Masters of Biomedical Innovation and Development (MBID) program at the Georgia Institute of Technology was one of just five companies chosen to present their plans as a finalist in the NFL’s 2019 edition of the “1st and Future” competition on Super Bowl weekend.

The annual competition, organized around the Super Bowl, is designed to spur innovation in player health, safety, and performance. Georgia Tech’s Advanced Technology Business Incubator (ATDC) was a cohost of the event at the Ferst Center for the Arts stage on the Tech campus, on the Saturday (Feb. 2) before the big game.

“The football game may not have been a classic, but the experience was unforgettable, pretty awesome really,” said Brett Rogers, one of four MBID students who launched TendoNova, which had to compete with more than 100 other applicants from across the planet to land a top-five spot in the 1st and Future finals.

This was an opportunity for TendoNova to showcase its innovative medical device, which targets chronic tendon pain, such as tennis elbow and plantar fasciitis. The company is developing a suite of specialized tools for minimally invasive orthopedic procedures that can be performed under ultrasound guidance in the physician's office.

Rogers and his teammates were in the first cohort of the accelerated graduate program (2013-2014), part of the Wallace H. Coulter Department of Biomedical Engineering at Georgia Tech and Emory University.

TendoNova did not win one of the two top prizes ($50,000 for first plus Super Bowl tickets, and $20,000 for second plus tickets), “but it was a tremendous experience just to be a finalist,” said Shawna Khouri, one of the MBID grads who co-founded TendoNova.

The company was represented on the national stage by co-founder and MBID grad Jonathan Shaw, and the CEO the team hired to lead the company, Roy Wallen. Meanwhile, Khouri, Rogers, and the company’s other co-founder/MBID grad, Luka Grujic, cheered them on from the audience.

Shaw and Wallen made their pitch in front of National Football League (NFL) players, coaches, owners, physicians, investors and viewers across the country. Judges included:

The full event, including TendoNova’s presentation, can be seen here on the NFL’s website.

"It was a tremendous honor to be named a finalist among so many other outstanding companies and to participate in the NFL ‘1st and Future’ competition,” said Wallen. “Support and mentorship from organizations like the NFL and ATDC are critical to our industry and help make these groundbreaking solutions a reality.”

While Grujic, a strategic product manager for Medtronic, came to Tech’s MBID program after earning his Bachelor of Science in Bioengineering and Biomedical Engineering at Boston University, Rogers and Khouri graduated from the BME program at Tech.

“When I was an undergrad, I co-oped for a medical device company and learned a lot from the experience,” Rogers said. “One of the things I learned was that medical device development is a whole different ballgame, very complex – there’s an alphabet soup that goes along with it.”

James Rains, professor of the practice and director of BME’s Capstone program and a researcher in the Petit Institute for Bioengineering and Bioscience, told Rogers about a new graduate program on the horizon, “that was hyper-focused on medical device development,” said Rogers, who enrolled for the first year of MBID.

Unlike his three teammates, all trained as engineers, Shaw came to the program after 10 years as a physical therapist and saw a lot of, “nagging injuries that just wouldn’t go away,” he said. “Matt Stinchcomb, a former pro football player is a friend of my family’s, and he’s still in pain from a ruptured tendon he had in high school. Construction workers suffer from these types of injuries, too.”

For two years before enrolling at Georgia Tech, Shaw had an idea for something that eventually became the Ocelot XT, a device for in-office ultrasound-guided orthopedic procedures. “I had a concept but no one around me who could build this stuff,” said Shaw, who was part of the Emory Sports Medicine team.

“What really drew our team together was the desire to solve a real unmet clinical need that Jonathan brought to us,” said Khouri, who is now the program manager of the Coulter Translational Fund at Georgia Tech. “He would treat people with chronic tendon pain and less than half of them would actually respond to physical therapy alone. So he knew exactly what needed to be happening at the tissue level.”

The TendoNova team has made both a business and a clinical impact, according to Sathya Gourisanker, professor of the practice and director of the MBID program. “They narrowed the need and their problem to create a novel system,” he said, describing the Ocelet XT, which allows for more percutaneous needle tenotomies, “which offers a low-cost tool to enable clinicians to perform procedures that were typically reserved for the operating room, right there in the physician’s office.”

Gourisankar explained that the team completed much of the concept phase and early pre-clinical activities during the MBID year. Following graduation, with a grant from the Georgia Research Alliance, TendoNova was able to advance its prototype. Meanwhile, each of the former students went into careers in the medical device industry.

“This called for tremendous commitment in terms of time and energy as well as teamwork in coordinating this extra project on top of their demanding professional activities,” noted Gourisankar. “But they were passionate, driven, and they succeeded in getting external funding for further development.”

The team eventually hired an experienced management team (Wallen and Chairman of the Board Lou Malice), and as they move forward to raise a new round of funding to get through regulatory clearance, being part of a Super Bowl, regardless of the game on the field, certainly can’t hurt.

“It was amazing,” said Khouri. “From the judges, to the interest we received from other folks in attendance, potential angel investors, the experience we had and the exposure we got was tremendous.”