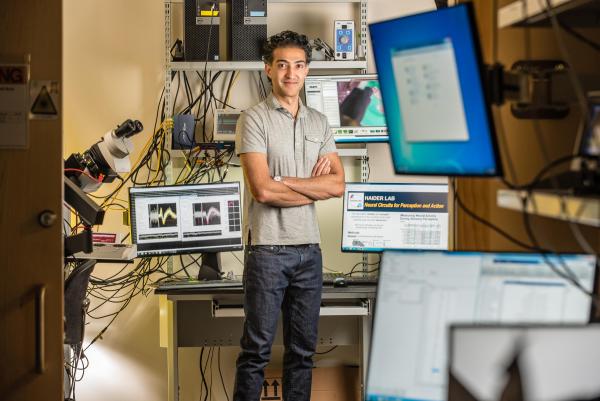 You want to find a friend in a crowded sports stadium because he has your cell phone. He’s wearing a yellow ballcap and sitting in the upper deck, so your eyes scan the scene like a camera, filtering out all of the visual clutter and you quickly zero in on the bobbing yellow ballcaps at the top of the stadium. This kind of sensory perception is called spatial attention, and it allows you to selectively process visual information by prioritizing areas within your visual field.

“It’s a well-studied cognitive phenomenon – we anticipate a certain color or a certain feature in a particular region of the visual scene,” says Bilal Haider, assistant professor in the Wallace H. Coulter Department of Biomedical Engineering (BME) at Georgia Tech and Emory University, and a researcher in the Petit Institute for Bioengineering and Bioscience at Tech. “Attention allows your brain to focus and extract information from the scene very quickly.”

Haider and his team are investigating, at a very detailed level, the circuits and mechanisms involved in visual spatial attention, and they recently received a BRAIN Award through the NIH to support their research.

President Barack Obama launched the BRAIN Initiative (Brain Research through Advancing Innovative Neurotechnologies) in 2013, an international public-private research collaborative supporting the development and application of innovative technologies in an effort to produce a new dynamic picture of the brain that will show how individual cells and complex neural circuits interact in time and space.

The goal is to fill the gaps in our current knowledge and provide opportunities to investigate how the brain allows the human body to record, process, utilize, store, and retrieve massive amounts of information at the speed of thought. And Haider’s $2.1 million, five-year award, administered through the NIH NINDS, is the latest BRAIN Award granted to Georgia Tech researchers every year since the program’s launch.

The role of attention in sensory perception is an important question in neuroscience, especially when trying to understand and create better treatments for disorders like schizophrenia, autism spectrum disorders, and attention deficit disorders. Haider and his team will utilize transgenic mice and combine high-density local field potential and neural activity recordings in the visual cortex, patch-clamp recordings from cortical and thalamic synaptic connections, cell-type specific optogenetics, and a well-characterized spatial attention task to elucidate the neural mechanisms of attention at multiple levels: specific cells, synapses, and circuits.

Haider’s BRAIN Award, which launched officially in the fall, will run for five years, through July 2023, and is valued at $2.1 million.