Georgia Tech Improving the Odds in Ethiopia
Because of Kennedy, BME/Petit Institute researcher Rudy Gleason has developed a novel diagnostic tool and BME students are taking on the challenge to design new medical devices
January 10, 2019 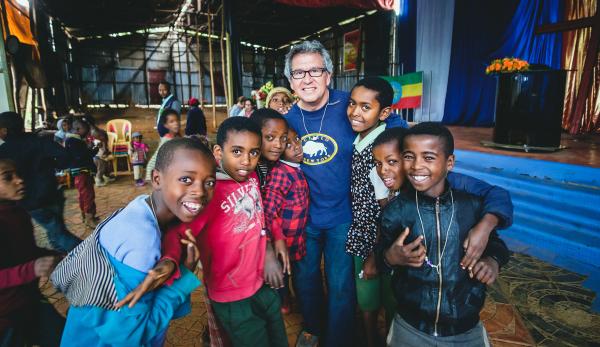 Rudy Gleason co-founded, with his wife Katie, Because of Kennedy, a faith-based non-profit that is advocating for orphan children in Ethiopia. 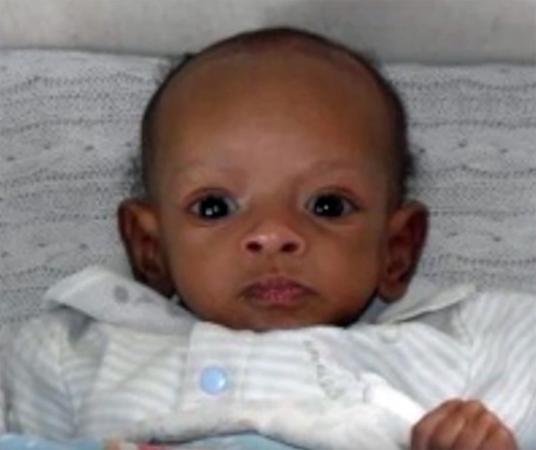 Kennedy Fireselam Gleason is the inspiration for Rudy Gleason and the BME efforts in device development that he has spawned. 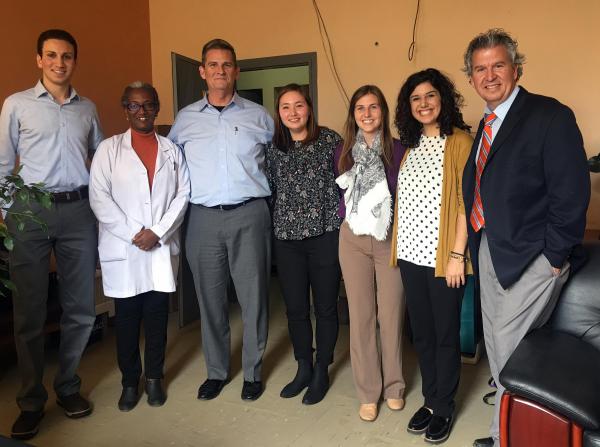 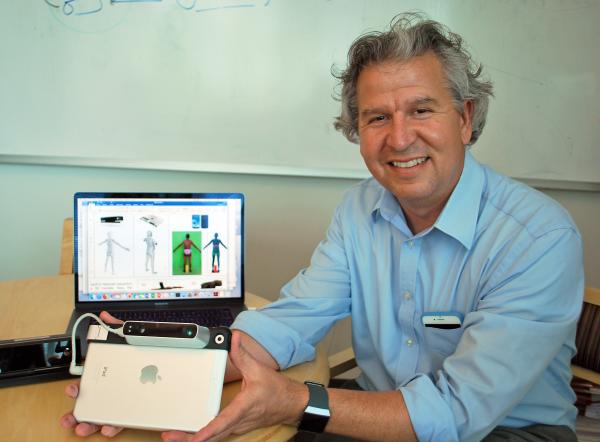 Rudy Gleason led the development of an easy-to-use, efficient diagnostic tool that combines an X-Box game system with a 3D camera. 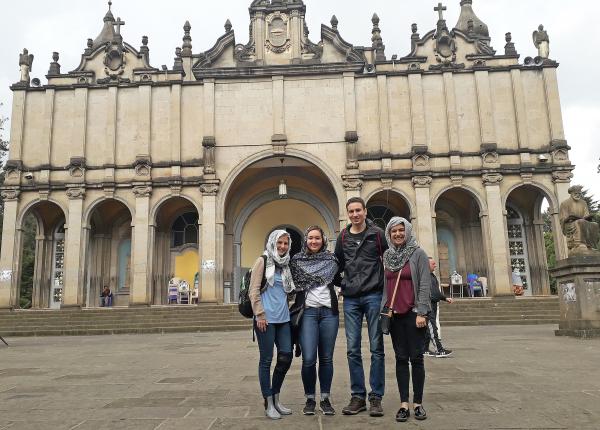 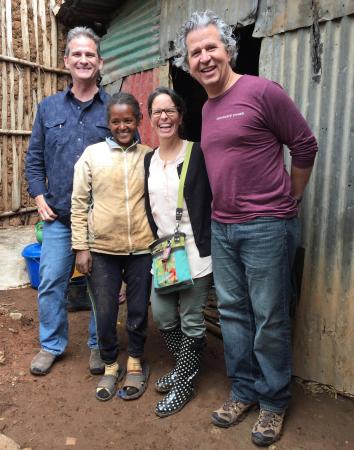 James Stubbs (left), and Katie and Rudy Gleason (at right) visit with one of their hosts (second from left) in Addis Ababa. 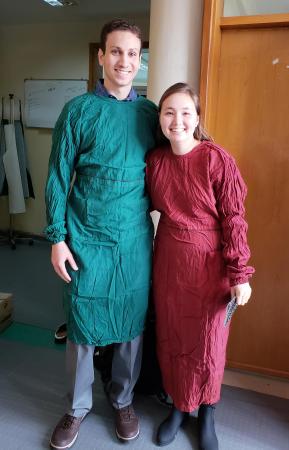 Kennedy Fireselam Gleason died on April 1st, 2009, in Ethiopia. She was not yet six months old and had never been held by her brokenhearted parents, Rudy and Katie Gleason. But as her 10th birthday passed on October 19, 2018, Kennedy was exerting a tangible influence in the world – on healthcare in her country, and on researchers and students here at the Georgia Institute of Technology.

The odds for women and orphan children in Ethiopia have improved through the work of a non-profit organization created by the Gleasons (called Because of Kennedy), and through research and development of diagnostic tools from Rudy’s lab and, potentially, from a group of Georgia Tech biomedical engineering undergraduate students working on their Capstone project.

But his latest development is a safe, low-cost, easy-to-use 3D camera technology to assess the risk of obstructed labor, which has a high mortality rate in Ethiopia. Gleason, a researcher in the Petit Institute for Bioengineering and Bioscience at Georgia Tech, recently published his team’s research in the journal PLOS One.

“My wife is a small woman, and when she was pregnant with our first child, her doctor said we’d have to keep an eye on her because if you have a normal size baby, there’s a chance you’ll need a C-section. And that’s exactly what happened,” Rudy said. “Take that same scenario to rural Ethiopia, and both the mother and the baby die. But if we can refer at-risk mothers to hospitals where C-section is an option, in a timely fashion, we could reduce maternal mortality in the developing world.”

Now, Gleason has more help from home in addressing healthcare challenges in Ethiopia. Just before the fall semester began, a team of BME undergraduate students returned to Georgia Tech after a week in Ethiopia as part of their senior Capstone project, visiting hospital OB/GYN wards, interviewing clinicians, midwives, and patients.

“They came back blown away by how many significant challenges there are, and how theoretically easy it would be to have an impact if we can develop useful tools,” said James Stubbs, professor of practice in the Coulter Department, where he coaches Capstone teams. Stubbs made a few trips to Africa over the summer, with Gleason and later with the students, to strengthen the relationship between the BME Capstone program and the clinicians and researchers in Ethiopia.

But so far, only one team, calling itself Libi Medical, has traveled to Africa. The four students who visited Addis Ababa and surrounding communities in Ethiopia – Yahia Ali, Hannah Geil, Elizabeth Kappler, and Elianna Paljug – are working on a fetal heart monitor. ‘Libi’ is derived from ‘Lib,’ the word for ‘heart’ in Amharic,  Ethiopia’s official language.

Georgia Tech has a history of trying to improve the human condition in developing countries across the globe. It’s right there as part of the university’s mission statement: “We will be leaders in improving the human condition in Georgia, the United States, and around the globe.” And it’s in Georgia Tech’s strategic plan: “Expand our global footprint and influence to ensure that we are graduating good global citizens.”

Accordingly, a number of bioengineering and bioscience people within the Petit Institute community have taken these goals seriously – for example, projects like those directed by Manu Platt (associate professor in the Coulter Department) in Africa, and King Jordan (associate professor in the School of Biological Sciences and director of the BioInformatics program) in Colombia and Africa.

Mission statements and strategic plans put the goals in writing, but it was personal loss that really drove Rudy Gleason. It was because of Kennedy.

“Katie and I wanted to adopt a child, and since she was adopted internationally, that’s something we’ve wanted to do,” Gleason said. “And it’s been pretty remarkable to see the impact Kennedy has had, in our lives and the lives of others.”

The Gleasons did their research, saw a great need among orphans in Ethiopia, completed all of the paperwork and interviews and were matched with Kennedy in January 2009. She was four months old and severely malnourished, weighing just five pounds.

They received their first pictures of Kennedy in March and fell in love. But Kennedy soon became very sick with diarrhea and then pneumonia. After she died, the Gleasons found strength in their faith, launching Because of Kennedy, devoting themselves as on-the-ground advocates for the orphaned and vulnerable in Ethiopia. The non-profit, faith-based organization is building a school, as well as operating food and women’s empowerment programs, among other things.

“Our daughter passed away before we could bring her home,” said Gleason. “She died of diarrhea. I remember thinking, ‘people are actually dying from diarrhea – how can this be?’ The thought stirred something in me and I wondered how I could use my work at Georgia Tech to be part of the solution. The first thing we did was continue trying to adopt in Ethiopia.”

Soon, their family grew with the adoption of daughters Isabella and Brooklyn. The Gleasons already had two biological children, sons Lawson and Eli.

In the years since, Rudy has received two Fulbright Scholarships to conduct research in Ethiopia, and his family spends part of every summer there. His research projects also have been supported by the U.S. Agency for International Development, National Institutes of Health (NIH), National Science Foundation, and American Heart Association.

His latest research and publication, “A safe, low-cost, easy-to-use 3D camera platform to assess risk of obstructed labor due to cephalopelvic disproportion,” was supported largely through a grant from Grand Challenges Canada as part of the global Saving Lives at Birth partnership.

In Ethiopia, up to 22 percent of maternal deaths can be attributed to cephalopelvic disproportion (CPD) related obstructed labor. Furthermore, maternal morbidity from CPD is widespread in Ethiopia and carries the additional weight of stigma and social exclusion.

Together, this team developed a low cost, safe, easy-to-use portable platform, utilizing an X-Box video game system with a Microsoft Kinect 3D camera. The device has been shown to have very good predictive capabilities and performed better than all previously published metrics.

“We’ve probably scanned a thousand women and it’s working really well,” said Gleason, who is pursuing support from NIH to carry out a validation study, and expects the device will eventually be deployed for use by clinicians in Ethiopia. He has the same high hopes for Libi Medical, still in the early stages of its product development in the Capstone program. “There’s this great energy in the BME students about using their gifts and skills to make a difference in the developing world.”

James Stubbs met Rudy Gleason the summer of 2017 when they were about 3,800 miles away from the Georgia Tech campus, in Ireland. Gleason and his globetrotting family were visiting the country and Stubbs was teaching a class in medical device development – most of his career has been spent starting medical device companies, running through the product development/commercialization gauntlet.

Gleason had initially asked Stubbs about creating a monitor for preeclampsia, a pregnancy complication that is about 300 times more prevalent in the developing world. That conversation led Gleason to inviting Stubbs to join him in Africa, which he did last June.

“We met with Rudy’s collaborators and they gave us a laundry list of issues they’re dealing with,” said Stubbs, who returned to Ethiopia two months later with the four BME seniors comprising Libi Medical.

Stubbs had already pitched the idea of a Capstone team visiting Ethiopia, or another developing country, during a spring semester session about senior design. The plan was for a full-year Capstone schedule (typically, teams take the course for just one semester). Yahia Ali was at the meeting, and he told Stubbs he was interested. At first it was difficult to find students because the two-semester, full academic year approach didn’t fit with a lot of schedules.

But soon, Elianna Paljug was recruited. She and Ali recruited the other two members of the team, Hannah Geil and Elizabeth Kappler. The team met throughout the summer, before leaving for Ethiopia in mid August. “We’re very passionate about our project and believe we have the skills that can help,” said Paljug.

“It was strange to see modern high-rise buildings and then next to that, people living in homes made of tarp,” said Geil. “It was important to see that with our own eyes. It was also amazing to see how brilliant and resourceful the clinicians are, with what they have to work with.”

After spending five days visiting different clinics and hospitals and comparing notes about the needs local clinicians had expressed, “we narrowed it down to fetal heart monitoring,” Paljug said.

There’s a pressing need for tools to enhance healthcare in a country where the pediatric mortality rate is very high -- children under five account for 30 percent of all annual deaths in Ethiopia.

The team is in the prototyping phase of their project this semester, emphasizing, said Kappler, “design inputs that would allow this device to be used effectively and efficiently in Ethiopia.”

Then they’ll return to Ethiopia during spring semester with a prototype, so clinicians there can make their assessments, and the team can further develop the tool for manufacturing.

“A lot of high-tech solutions have been donated to clinics there before,” Paljug noted. “But then they break and there are no spare parts and there's no way to fix them, and nobody who knows how. We want to create something that enables a better standard of care, ideally something that can be manufactured and repaired in Ethiopia.”

She paused a moment, then added, “Our goal is to create a sustainable solution.”